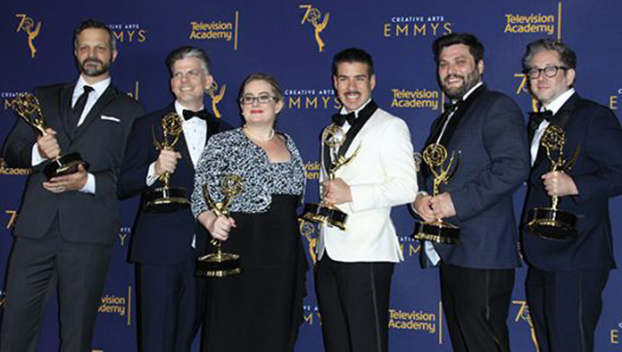 On Sept. 17, she received an Emmy Award for the Netflix series, “Queer Eye.”

“It was a whirlwind,” Peters said, of the evening, which focuses on various sectors of television and broadband programming

During the 70th anniversary of the awards show, Peters, who serves as the editor for the television series, along with the rest of the cast and crew won Best Structured Reality Program.

“We were delighted and busting at the seams. It was amazing,” Peters said, after hearing the first season of their television series had won.

Peters, who is a 1995 graduate of Vicksburg High School, said she has been working with the award-winning show for the better part of a year, but her success did not come overnight.

After graduating from the University of Southern Mississippi in 1999, Peters moved to the Big Apple.

“I got my bachelor’s degree in environmental science and moved to New York City on the premise I wanted to learn more about environmental racism,” she said, and began working for a non-profit organization.

“Through that I realized that my abilities were a little more abstract, and I wanted to pursue a more creative route, so I did day jobs while I learned how to be a screen writer and basically taught myself how to make television and film,” Peters said.

“Basically, I just worked my butt off and taught myself everything,” she added.

Although it had been no easy task, Peters admits she eventually became a producer by just doing it.

However, after finishing her first feature documentary, which was self-funded and self-made, Peters said it was time to “grow up.”

“Once I buttoned that up (the documentary) and put it on the shelf, it’s like ‘ok, I have to be a grown up now.’”

Peters said it was hard to break into the system, but decided it was time to think bigger, so she said she “rebooted” her career in the industry.

“I was like, ‘I got to buckle down and learn the craft,’ so I started out as an assistant editor. I did the big shows. I did the ‘The First 48’ and ‘Storm Chasers’ and a handful of other projects and then with some luck and ability to edit, I was a professional before I started doing editing,” she said.

After 9/11, Peters said, things had slowed down in New York, which fortunately for her opened the door to an editing position.

“I went into editing specifically because that was a job somebody had and I found out I had a knack for it,” she said.

Although Peters had edited the feature film she had made, doing it for “real,” enhanced her talent.

“It just became something I was good at,” she said.

Peters, who was one of seven female editors nominated in her category for an Emmy this year, said her job with the Netflix series involves editing hours and hours of footage that is filmed.

“Queer Eye” is a show that features five gay men who make over individuals.

“The way they do all these sorts of shows is they have the main talent, which in our case if the Fab Five, and they have a casting process for the show who we call the heroes. So each episode is based on one hero and their transformation process,” Peters said.

The first two series were filmed in Atlanta, and Peters, who still resides in New York, said she takes this footage and edits it.

“I step in when they finish filming a week with the heroes. I look through the footage and find the story that makes sense,” she said. “I condense a week’s worth of footage, which can add up to 50 to 60 hours of filming and then I make it into 45 entertaining minutes.”

Prior to the Emmy’s, Peters said she had a feeling the show could possibly win.

“Queer Eye,” is a reboot of a former series that had aired on Bravo, Peters said.

“I think at first everyone was a little skeptical the series was going to be the same format cookie cutter show,” she said. “But I think we surprised everybody by making it not just a makeover show. We dig a little bit deeper and help people transform a little bit more on the emotional level.”

Another of Peters’ premonitions that came to pass that night was her trek to the stage.

“I had been so afraid of tripping and as a self-fulfilled prophecy, I did trip going up the stairs,” she said.

But once handed her Emmy, which Peters said was “very heavy,” all thoughts of clumsiness vanished.

Peters attributed her success in part to her family.

“I could not have done this without the support of my husband, (Joel Gilbert) and my son. I take risks. I don’t do safe gigs that have job security, but I have security with them,” she said.

“They always let me be myself and were never overbearing,” she said.

Growing up in Vicksburg, Peters said, also played a role.

“I credit my math teachers and principal Kermit Harness who were all very huge supporters of whacky crazy Amy in high school, and I don’t want to sound antagonistic, but I even credit the people who were mean to me, the adults and teachers, who were against my creative impulses. I credit them for helping drive me as well,” Peters said.

Recognition was also given to the Vicksburg Theatre Guild’s Fairy Tale Theatre, where Peters spent many of her childhood summers on the Parkside Playhouse theatre stage.

After watching a dress rehearsal of an upcoming production at the high school when she was in the eighth grade, Peters said, she became “hungry to do anything theatrical.”

“So naturally I looked to the theater and they had the summer program — Fairy Tale Theatre. Now looking back, I realize how amazing that was. I was able to dress in a cow costume and be the cow that was sold in ‘Jack and the Magic Bean.’ I even did a little dance number, and it was ridiculous and funny. Parents who were active in the theater helped me make my costume. It was this great thing. I can’t even say how amazing and rich it was,” Peters said.

However, when it came to helping the group with lighting, Peters said, this had not been her strong suit.

“I was the worst lighting director. They never let me do that again,” she laughed. “But that’s just it. You fail, and you achieve and whatever works for you, you find out, and I was able to do those things at a young age so when it came time for me to make my own career I had the tools already.”