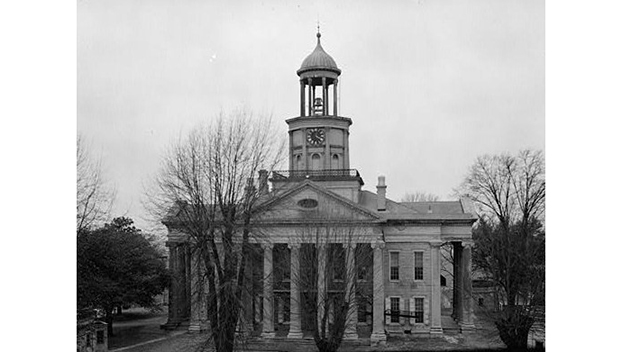 VICKSBURG — The retaining walls surrounding one of Mississippi’s most-visited landmarks — the Warren County Courthouse Museum — is falling apart and county supervisors are researching the next steps to preserving the national landmark.

Also known as Warren County Courthouse, the historic building stands prominently on a hill in Vicksburg and is to many a symbol of Confederate resistance during the Siege of Vicksburg in 1863. It was designated a National Historic Landmark in 1968 and a Mississippi Landmark in 1986.

Warren County supervisors have decided to hire an expert to do consulting work in determining how to repair a retaining wall at the historic Warren County Court House Museum.

Warren County Buildings & Grounds Director Chuck Thornton told the Warren County Board of Supervisors during their regular meeting Monday, the Mississippi Department of Archives and History recommended George T. Fore & Associates to perform the consulting service. Thornton said the price tag for the study would be approximately $32,000.

George T. Fore & Associates, located in Raleigh, North Carolina, is currently doing some consulting work at Windsor Ruins and in Cary, according to Thornton.

“He has extensive knowledge of this type of work,” Thornton said. “He came and looked at the wall and is very interested in doing a study of the wall.”

Thornton said the information gathered from the study would be taken to an architect to “figure out what it’s going to cost to fix this retaining wall around the museum.”

Supervisor Charles Selmon asked why Warren County couldn’t seek the services of someone local, or at least someone from Mississippi.

Thornton said he found a vendor in Mississippi to give him a price to repair the wall, but said MDAH gave the recommendation on who to use for the consulting service.

Board President Richard George said the county has been able to acquire grants for previous work on historic structures, including the Old Court House Museum, through the recommendation of MDAH.

“Their input is a necessity and not an option,” George said. “He apparently must be very accomplished because one thing about archives and history, they will not recommend someone who isn’t capable.”

“I’m not questioning archives and history, but I think it’s important for us to work hard to try and get local people to do local work, especially if we can’t get local, at least look in the state,” Selmon said.

The supervisors recessed their meeting to 9 a.m. Dec. 17, in their board room on the third floor of the Warren County Courthouse.

Forecasters: Tornadoes likely in parts of Southeast US — including Mississippi — Tuesday