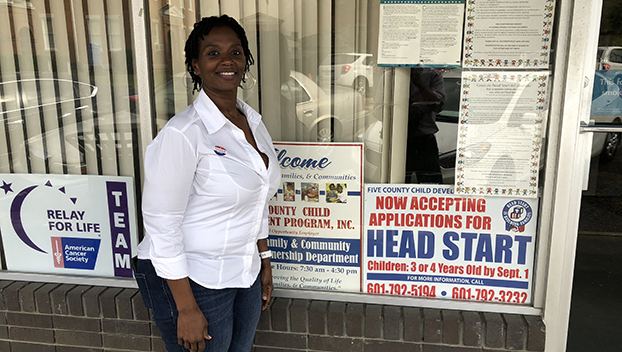 When Chrishasta Gardner walked across the stage Friday to receive her bachelor of social work degree from The University of Southern Mississippi, there were two things she was sure of. She was the first graduate in Mississippi to earn a minor in child advocacy studies. And she was grateful for the moment.

A Non-Traditional Journey to Graduation

Gardner’s gratitude is 21 years in the making, her journey that of a “non-traditional” student who was in the right place at the right time to earn her unique distinction in regard to the new minor, which became available in the 2017-18 academic year.

“Now I’m about to tell my age,” she says before explaining that she graduated from Prentiss High School in 1997, attended Alcorn State and then dropped out after “life happened. … I started and then I stopped.”

Two years ago, she decided that the time was right to go back to school, at Southern Miss.

“I just finally made up my mind that it’s time for me to go back, to finish, to do what I know I was destined to do,” she says. “So that’s how my story began at Southern Miss.

“It’s just like I say, never give up, no matter what things might happen. Never give up if it’s something you’re passionate about doing. You’ll know when your time comes. My time was two years ago.”

Leading the Way in CAST Curriculum

Southern Miss – and the state – are at the forefront in developing curriculum for the child advocacy studies minor – a nationally recognized curriculum more commonly known as CAST, for Child Advocacy Studies Training. The university was the first in the state to offer the minor, with Belhaven University in Jackson recently adding the state’s second.

“Mississippi is a model for taking big steps toward addressing this issue,” says Dr. Tamara Hurst, assistant professor of social work, who led the curriculum development. “When other states are looking at how to implement this in their universities, they look at what we’re doing.

“It’s been a long time in the making, and it does feel good to say we have someone graduate with the minor. Shasta wanted to be the first in her family to have a college degree. Her sister, who is a master’s student in social work, Icerica, got her undergraduate degree first. So Shasta is now very excited to be the first to have the CAST minor.”

The interdisciplinary CAST curriculum helps prepare students to identify, report and prevent child abuse and neglect. It was created in coordination with the Children’s Advocacy Centers of Mississippi and the State Attorney General’s Office.

“Students completing a CAST minor have been taught a holistic, multidisciplinary understanding of how they should effectively report and respond to child maltreatment,” says Christy Ainsworth, CAST coordinator for the Children’s Advocacy Centers. “They will enter the workforce ahead of their colleagues in knowledge and skill in the prevention and remediation of child maltreatment, and they will stand out among their competition for jobs and promotions.

“Not only will this minor put them ahead of the game in knowledge and skill, but it will impact the lives of real children in the communities they serve, not just in Mississippi, but across the country and possibly internationally, as these students go back into their communities.”

Courses at Southern Miss are relevant to students studying any discipline that will ultimately lead to a profession that interacts with children and families: criminal justice, education, human sciences, nursing, psychology, social work and sociology, among others.

CAST graduates are well suited for jobs with the Mississippi Department of Child Protection Services or similar government and social welfare agencies. Gardner says she wants to be a school social worker.

“I know she’ll work well in a public school setting,” says Janet Moak, family service and ERSEA (Eligibility, Recruitment, Selection, Enrollment and Attendance) director at Five County Child Development, a Head Start agency in Prentiss where Gardner interned. “I think she will be a leader in social work. I see her doing great things in the future.”

Being the First: ‘It Made Me Feel Joy’

Looking back, her only regret, Gardner says, is not returning to school sooner. But …

“Like I said, this was my time. Two years ago was my time to start this, and if I did it earlier, I wouldn’t be the first to do the CAST minor.”

Adding the new minor to her social work major meant sacrificing her summers so she could take the additional 18 required hours. But she says the extra work was worth it.

“It made me feel … joy,” she says, after a pause, about being the first to earn the minor. “l didn’t know I would be the first one; there were others in my cohort who were interested, but they didn’t really pursue it like I did.

“When it really set in that I would be the first one, it made me think about how I never gave up, even though took me so long to come back to school. I’m looking at the many opportunities it might open for me. I really can’t wait to see what the future holds for me with a CAST minor.”