Things are gett ‘ugly’ for Christmas softball fundraiser in Vicksburg 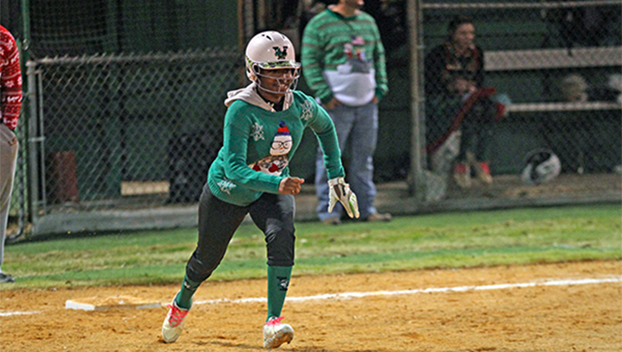 A Vicksburg High softball player rounds first base during the 2017 Ugly Sweater Game. This year’s edition of the game is scheduled for Saturday at 5 p.m. at VHS’ Softball Swamp field. (File/The Vicksburg Post)

VICKSBURG — In a couple of weeks, Santa’s sleigh will fly through the skies over Vicksburg. On Saturday, it’ll be softballs filling the air.

“I’m probably going to be a reindeer,” VHS softball player Kayla Foster said with a laugh.

The game is about more than just fun, though. The admission price for fans is either a new toy or monetary donation that will go to the Warren County Sheriff’s Department’s annual toy drive. The toys and money will help give the children of inmates at the Warren County jail a Christmas that they might otherwise not have.

“It’s not about the win and loss, it’s about coming up here and having fun. It’s a community service type deal where the girls can pass something along,” Vicksburg softball coach Brian Ellis said.

After its inaugural run last year was a success, Ellis and the VHS booster club decided to expand the event this time.This year’s event will include a Christmas carnival with games and booths from various school clubs.

Tickets for the carnival are 25 cents each, and the attractions at the various booths will each cost a certain number of tickets. Ellis said the softball games are for the toy drive, but the carnival is a fundraiser for the softball team to help pay for several tournaments and trips in 2019.

“The toys and the donations at the gate will all go to the Sheriff’s Department,” Ellis said. “And then we’re trying to make some money because we’re playing in a tournament at East Central Community College at the end of spring break, and then we’re also trying to raise money to go to the Division I College World Series in Oklahoma City.”

The mood of the day will be light and fun. An award will be given to the player or coach with the ugliest sweater, and “chance cards” requiring players to do various things during the game can be purchased by fans for $1 each.

“The baseball team has to bat opposite handed. There are chance cards where the pitcher and batter both have to be on one knee, fun stuff like that,” Ellis said. “We’re going to do it every year. It’s a great cause, number one. And then number two, it brings us and the baseball team together. We can relax. It’s something they love to do.”