Brookhaven nurse to focus on healing one meal at a time 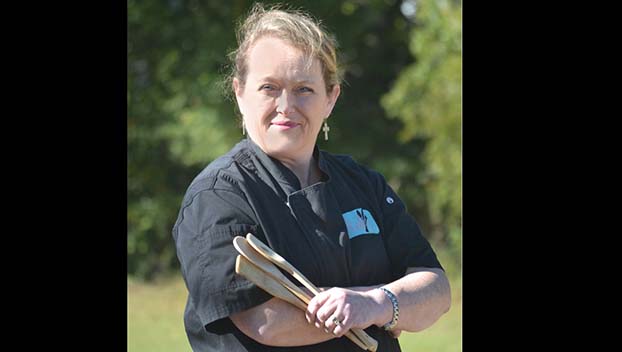 Leanne McCaffery’s collection of recipes is like a box chock full of handwritten love notes. She pulls out the cards and memories of good food and happy times come flooding back.

She looks at her grandmother’s cursive writing on a card that says “From the Kitchen of Lou Thompson” and explains how it’s a recipe for Maw Maw Thompson’s dressing.

Her grandmother made the dressing with her before she died. She has the photographs to go along with the recipe of the pair in the kitchen sharing laughter and cooking secrets.

There’s the card that McCaffery wrote when she was 12 years old, copying her great-grandmother’s recipe for molasses teacakes.

Then there’s the one of the pineapple cheese casserole she’s made so many times she doesn’t look at the card anymore. It’s a holiday staple that everyone wants to serve with their ham, she said.

And while it may all just look like measurements and ingredients on index cards and notepaper, it’s so much more than that.
It’s a written history of holidays spent around a crowded table, church fellowship suppers and dishes served after visitation for a grieving family.

It’s both her history and her future.
McCaffery has been turning those recipes into a business for years. After Jan. 1, she’ll be doing it from her own commercial kitchen.

The former labor and delivery nurse is bringing So Delish Catering to 119-B W. Monticello St. in the spot that was Ruby & Ethel’s. She’s transforming the back showroom into a kitchen and the front retail area into a place to pick up grab ‘n’ go lunches and casseroles.

It’s an opportunity McCaffery has been dreaming of for decades.

The McComb native comes from a family of three girls. Because she was the oldest sibling and the oldest granddaughter, she got elected to help in her grandmother’s kitchen for family gatherings. Her sisters — Gretchen Neal and Carly Jordan — aren’t as handy around a stove.

“They don’t even like to cook. I love to cook,” she said.

She and her husband Darren have three sons — Boyd is 19 and the twins, Seth and Noah, are 18. They love their mom’s cooking and often had some of her family recipes packed for school.

That caught the attention of several hungry teachers who requested some for themselves.

“Out of Seth’s lunchbox was born Leanne’s Lunchbox,” she said. “That’s kind of where I started, cooking for the teachers. I would take orders and I would deliver it to the school, like casseroles for their supper, mostly poppy seed chicken.”

She’d do plate lunches, too.

That was about 12 years ago and it was great for a while, until her health issues caused her to cut back in the kitchen.

McCaffery has been called a walking medical textbook. She’s had Hodgkin’s Disease, cancer, open heart surgery to replace a valve damaged by the chemotherapy for the cancer and liver failure. She’s on a transplant list for that.

“The Lord has just brought me through every bit of that. I’m such a strong believer in prayer,” she said.

She cooked when she could, and let the in-laws fill in when she couldn’t. She gradually started cooking for acquaintances as she regained her strength.

She can’t work as a nurse anymore because of the demands of the job, but she’s discovered that cooking for others satisfies her nurturing instincts.

“I feel like my caregiver instinct is coming through in cooking for people. I feel like I’m still nursing in a way, but in a different way,” she said.

In 2016, word of mouth continued to grow and friends started making requests for dishes.

She was asked to cater a low-key Republican of the Year event. She thought it would be just the winner, Bill Sones, and his family there, but several state dignitaries, including Secretary of State Delbert Hosemann, were in attendance.

She was nervous but catered a great affair.

“I realized I can do this,” she said. “So for the next year I got four or five jobs off of that.”

Now she’s booked up through January, catering at least two events a week.

She provides food for lots of weddings, but they are not the soirées she remembers from her childhood.

“I feel like weddings have changed,” she said. “People have gotten away from the mints and nuts and punch and finger sandwiches. There’s no more chicken salad finger sandwiches and pimento and cheese, and that be it. People come to weddings and they expect a meal. A taco bar or a mashed potato bar, a s’mores bar. A bacon bar.”

For big events — she’s working on a menu for 500 — she has a crew of people she calls on, most related by blood or friendship.

But weddings aren’t the only things keeping her busy. She’s making casseroles for busy working moms. That’s going to be a big part of her focus.

“For moms who either don’t know how to cook, don’t want to cook or don’t have time to cook,” she said.

She plans to offer curbside service and delivery for customers who want to send dishes to sick friends, families who have lost loved ones or welcomed babies, or anyone who might need a casserole.

“There are so many different areas you can go with that,” she said.

She also plans to offer one-serving dishes for elderly customers who live alone who want home-cooked hot meals without the hassle of cooking it themselves.

Nobody wants to go to the grocery store and get all the stuff,” she said.

“Why not offer that for people? There are a lot of elderly baby boomers in this town,” she said.

She can also create orders based on the family requirements — paleo, gluten free, sugar-free, low fat.

“There will be a lot of ways I can personalize meals for families,” she said.

“It’s going to be a really good thing, I think. Something unique and different for Brookhaven, something that we’ve needed a lot of.”

McCaffery took over the space in the building owned by her cousin, Holly Pappas, on Nov. 1, and she hopes to be catering a wedding Dec. 1 from her new kitchen.

“The Lord has blessed me with really good health for the last six to nine months and I
haven’t slowed down. I’ve used it and run wild with it,” she said.

She wants to cook while she can and teach others with classes for pre-teens, teens and millennials.

“There’s a whole generation that’s learning to go out and eat because it’s easier. But they’ve got to learn or it’s all going to be lost,” she said.

McCaffery is in her happy place when she’s creating in the kitchen.

“I’m just doing what I love. I absolutely love it and I don’t see me getting tired of it anytime soon,” she said. “It’s just the satisfaction of seeing people happy and full and content and satisfied. I don’t know what the future holds. I’m just going to let God guide me. He’s blessed it so far.”