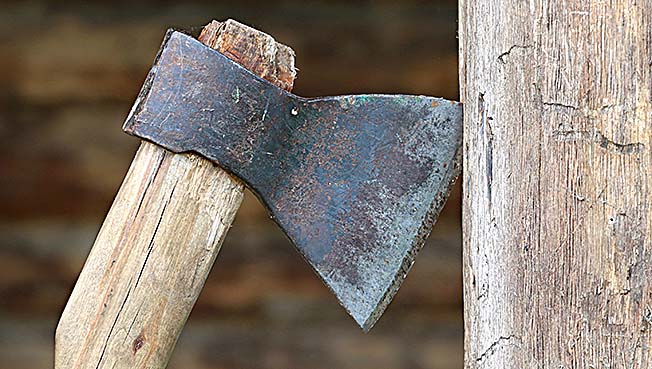 Come in, make yourself at home, heave an ax across the room.

A local husband and wife are hoping the Brookhaven Board of Aldermen will allow them an exception under the new zoning rules to do exactly that. Robby and Kayla Goodson appeared before the board Tuesday to ask aldermen to relax the new rules against indoor recreational businesses in the downtown area so they can open up an ax-throwing venue.

“Think about a game of darts, but on steroids,” Kayla Goodson said.

Goodson said she got the idea for an ax-throwing business after visiting AxeAdventures in Nashville, an indoor ax-throwing range and restaurant. She and her husband want to open a similar venue, on a smaller scale, in the two-story building at the corner of North First Street and East Monticello Street, which they recently purchased.

After Goodson explained the nature of the business, aldermen’s questions immediately turned to safety. She said the new business would have age limits, require parents to accompany their children, require waivers and safety coaching before an ax can take flight.

“It’s not going to be where you can drop your 12-year-old off and leave,” she said. “We want it to be a clean, family environment, something that brings something new to the community. There’s nothing like this in Mississippi.”

Before the Goodsons can split wood, aldermen would have to make an exception to their newly updated zoning ordinance, which restricts “recreational or amusement classifications when conducted wholly inside an enclosed building” in the C-2 Central Business District, which covers all of the downtown business area and other areas east of Hwy. 51.

The new rules were adopted two weeks ago after the old zoning ordnance was reviewed for around 18 months. Besides the restrictions, the new rules mainly update definitions for business types that didn’t exist, such as vape shops, when the ordinance was last updated in 1992.

Goodson explained she and her husband made an offer on the building before the board’s work on the zoning ordinance was finalized, and closed on the loan after the new rules went into effect.

Ax-throwing is a sport growing in popularity across America. Where it came from isn’t entirely clear — throwing axes have been around since prehistoric times and were used in combat in the Middle Ages, and by numerous cultures. Early American settlers had ax-throwing contests, probably inspired by Native Americans. The sport is popular at lumberjack competitions.

“It’s a growing sport,” said Ward 2 Alderman Shannon Moore. “And I do agree there’s no entertainment in Brookhaven.”

City attorney Joe Fernald agreed to meet with the Goodsons to get more information about their plans and make a presentation to the board. He said the new zoning ordinance may restrict the plan for ax-throwing, but the board can allow an exception — a public hearing, at which opponents of the exception would be allowed to speak, would have to be held before an exception is granted.