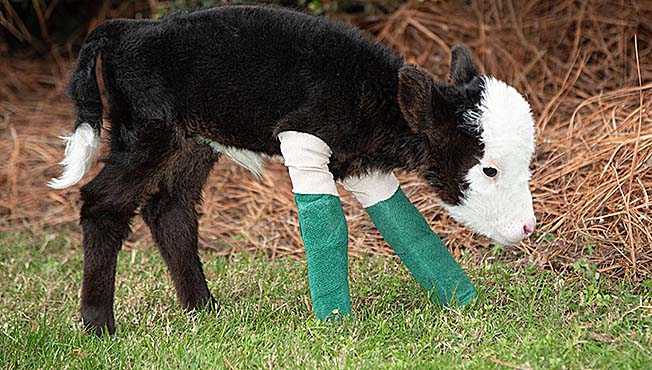 A tiny, premature calf known as “Lil’ Bill” is receiving expert care from a team of animal experts at Mississippi State’s College of Veterinary Medicine. Born about a month premature, he is thought to be the world’s smallest bull, weighing in at a mere 7.9 pounds when he arrived. (Photo by Tom Thompson, courtesy MSU Veterinary School)

STARKVILLE (AP) — Bill was born on Oct. 27 and weighed 7 pounds, 14 ounces. There would normally be nothing unusual about that since the average weight of a newborn is 8 pounds.

That’s for a human baby.

Bill is a calf and his arrival at Mississippi State University’s College of Veterinary Medicine has created quite a buzz. For good reason — the average calf weighs 63 pounds at birth, which means “Lil’ Bill,” as he is affectionately called, is likely the world’s smallest bull. He is a Simmental breed.

“The reaction has been much larger than I anticipated,” said Dr. Gretchen Grissett, the university’s bovine expert who has been Lil’ Bill’s attending physician since he arrived at MSU at four days old. “I’ve talked to people all over the country and all over the world. Everyone is rooting for this little calf.” News of Lil’ Bill even made The Late Show with Stephen Colbert the night of Dec. 13.

On Dec. 16, the undersized bull turned 50 days old. That, in itself, borders on a miracle.

“To be honest, it’s a wonder he survived at all,” said Grissett, who estimates that Lil’ Bill was born at least four weeks premature and may suffer from a form of bovine dwarfism. MSU has sent his DNA to be tested for dwarfism, but it will be a few weeks before the results of those tests come back.

Born at a birth weight eight times lower than the average calf, Bill’s owners found him one morning while checking on their cattle.

The owners, who live in north Mississippi, prefer to remain anonymous.

“They are experienced ranchers, and they did a tremendous job of taking care of him for those first few days,” Grissett said. “It’s a wonder he lived even that long. So, they really deserve a lot of credit for keeping him alive.”

After a few days, Grissett said, the ranchers realized the tiny bull needed far more care than they could provide and contacted MSU.

“We had already heard, through the grapevine, something about a tiny cow being born,” Grissett said. “When his owners did call, they said they thought he weighed 10 pounds. We all said, ‘No way. We’ve got to see this.’ It turned out, he weighed even less than that. We were in disbelief. We were surprised and stunned.”

For Grissett and the CVM staff, Lil’ Bill’s arrival has been a challenge and a learning experience.

Unlike human babies, there are no neonatal facilities for livestock, although Lil’ Bill’s health issues are those common to premature human babies.

“The odds were stacked against him from the start,” Grissett said. “They still are. We’re not out of the woods yet.”

The most immediate concern was the development of the calf’s lungs.

“He just wasn’t ready to be born yet,” Grissett said. “He had a lot of respiratory issues when he first came to us and he had to be on oxygen. He required round the clock attention.”

Lil’ Bill is off oxygen now, though.

“The maturity of his lungs is one of my lesser concerns now,” Grissett said. “Right now, we’re concerned about some gastrointestinal issues and his joint and bone development.”

In human babies, joints and bones continue to develop in infancy, but in the natural world, horses and cows — being prey animals — are hard-wired to be on their feet within minutes after birth.

Lil’ Bill was on his feet right away, putting stress on joints and leg bones that were far from ready to support even his minimal weight.

The vets splinted his legs and are closely monitoring his activity.

“He’s walking around, even bucking a little bit, just like a normal calf,” Grissett said.

She remains cautious, however.

“There are still lots of hurdles,” she said. “His lungs are better. He’s growing (he’s now up to 12 pounds) and stronger. But with premature babies, you overcome one issue and have two more coming. We really don’t know how things will play out. We’re making sure we provide the best quality of care we can give him.

“I think if we can just get him through these baby issues, I think he can have a decent quality of life.”

Although guarded in her optimism, one thing is already clear to Grissett.

“Just to make it this far, you have to say Lil’ Bill is a fighter.”
___
Information from: The Commercial Dispatch, http://www.cdispatch.com