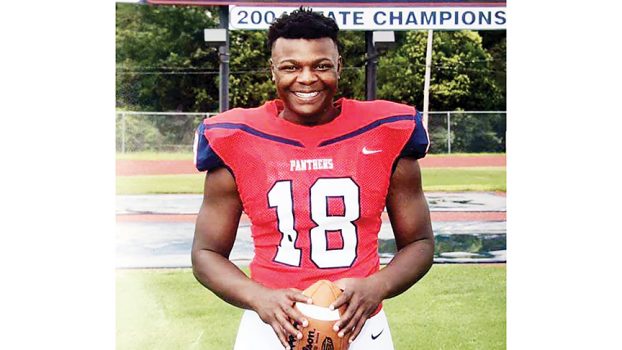 All Tiffany Blackwell wants for Christmas is an old iPhone with a banged up purple cover.

The phone belonged to her son, Jordan, who was shot to death May 28, 2017, and was stolen from their home earlier this week.

“Please return the phone,” she said. “We don’t care about any of the other things. I just hope that they have a heart, just please return his phone.”

The iPhone 7 was one of four cell phones taken Monday from a break-in at the Blackwells’ home on Coopertown Road off Nola Road. A safe containing important papers was also opened and some documents were taken, she said.

And even though other items are missing, it’s Jordan’s phone that is most important.

“That phone was sentimental to us,” she said. “We want to cut it on, we want to see pictures of him, read old text messages. When they stole it, they took that from us.”

The 17-year-old was shot to death May 28, 2017, along with his younger cousin and other members of their extended family. A Lincoln County Sheriff’s deputy was also killed.

Blackwell and her husband, Rev. Shon Blackwell, believe the phone and other items were taken Monday afternoon while they were at work.

She doesn’t know how the thieves broke in. No doors or windows were unlocked.

Tuesday morning, Blackwell noticed a Blackberry phone on the kitchen counter that should have been tucked away in her bedside table along with Jordan’s phone. When she saw the Blackberry, she rushed into her bedroom to check for Jordan’s iPhone but realized it was missing.

The bed’s mattress was also moved.

Thieves took three other phones besides Jordan’s, she said. They also took papers that were in their safe deposit box.

No other homes on Coopertown Road were burglarized, Sheriff Steve Rushing said.

Blackwell expects the thieves will try to sell the phones online or at pawn shops. She hopes whoever sees it realizes it is stolen and returns it to police.

The phone was still in the purple case she used on it before she passed it on to her son. It had a photo of Jordan playing football for the Brookhaven Panthers on the main screen and text messages from friends that were sent after he died that say they miss him.

Anyone who sees the phone should know it’s his.

“It was just like he had it when he died,” she said.

Blackwell kept service for the phone turned on until a few months ago. She could hear his voice on the outgoing message when she needed to. She read messages from his friends.

They say things like “I miss you, Black,” “Fly high,” “Wish you were still here,” and “Life isn’t the same without you.”

“I would see it. It would pop up on the home screen,” she said. “They’d still leave messages on it. They’d still tag him in different things. I could see it when I would charge the phone up.”

Losing this connection to her son has been difficult.

“It’s very hard during the holidays and this on top of it even makes it harder,” she said.