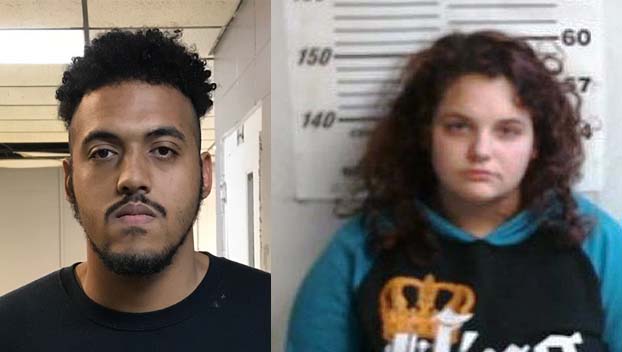 Two Picayune residents were arrested Thursday afternoon as a result of an investigation into alleged child pornography activity.

The case led to a warrant being served on Thursday at 2 p.m., which included a joint effort between detectives with the Picayune Police Department and the Attorney General’s Internet Crime Task Force, Moeller said. Evidence had been collected that alleged videos containing child pornography were being sent from the home on Bender Street and Griffin was responsible, Moeller said.

As a search warrant for the home was secured, agents with the Internet Crime Task Force and detectives with the Picayune Police Department set up surveillance on the home.

Once the warrant was secured, agents and detectives moved in to search the home and any electronics inside.

Moeller said that when detectives and agents approached the home, they found Herndon outside, and Griffin in the home.

Inside the home three children younger than 3, were found to be living in deplorable conditions, leading detectives to call Child Protective Services.

Representatives with CPS arrived and determined that the children needed to be moved to more suitable living conditions.

Herndon, who is the mother of the children found in the home, was taken into custody for questioning,  and later arrested for three counts of child neglect, Moeller said.

Bond for the suspects has not been set, so both were in police custody as of Friday afternoon. Moeller said that Griffin was not the father of the children in the home.