From Alcohol and drugs to healthy eating: Mississippi chef helping others to learn from his life experience 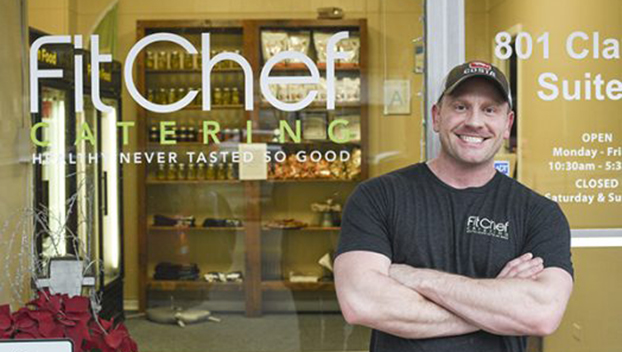 VICKSBURG — Now that Christmas 2018 has come and gone, many may be stuck with a budget deficit.

From holiday parties to family favorites served, many will be stepping on the scales and realizing they consumed more calories than they burned.

However, with the start of a New Year, resolutions will abound for ways to control calorie spending.

One of those options includes healthy eating.

And for those who have run out of excuses as to why they struggle with improving their eating habits, Fit Chef Catering, a new business in Vicksburg, may be the answer in learning how to balance eating habits.

“It’s hard to learn how to eat healthy if you haven’t ever eaten healthy,” owner of Fit Chef Catering Kevin Roberts said, “And a lot of people in Vicksburg haven’t had a chance to stick to healthy eating, so now they have a chance.”

Eating healthy is personal for Roberts.

He said he spent his entire childhood and teenage years overweight and struggling with eating disorders, but when he turned 19 years old things changed.

“I developed a tumor on my thyroid and I lost like 100 pounds. I struggled and started having a lot of health problems and then finally in 2012 (after battling alcohol and drugs for more than 10 years) I finally got sober and fitness became my lifestyle, so I started eating healthy,” he said.

Roberts “got into the business of being a chef,” he said, because he didn’t do very well in school.

“I kept dropping out of college, and (working as a cook) was my fall back.”

Roberts said his first job was at a local Antebellum home.

“I got asked to be a cook at Cedar Grove 11 years ago. I was a prep cook, and the next thing I know I am all over the country — Florida, California, Alaska,” Roberts said, of his culinary journey.

And in addition to his first job, his Vicksburg resume also includes work experience at 10South, The Anthony and Margaritaville.

“I’ve been in the restaurant business my entire life,” Roberts said, but now as owner of his own business, he said, he is finally doing what he truly enjoys, offering a menu that not only satisfies the palate, but also benefits the waist line.

“I know longer felt comfortable cooking food that I don’t personally eat,” Roberts said, “So the goal was to provide a service so people had a chance to eat healthy.”

Roberts, who is also certified as a personal trainer through the ACE — American Counsel of Exercise, compared his Fit Chef Catering menu to one used by body builders.

“The menu reflects kind of a body builder background,” he said, but there is also a weight loss and ketogenic background to the menu, too.

“Half of our menu is dedicated to ketosis or keto where we use low carb high fat content,” he said.

“We also use all natural ingredients with no additives or preservatives, and the only oils we cook with are olive oil, coconut oil and animal butter,” Roberts said.

Meals are also weighed in portion.

“That way you will know exactly what you are supposed to eat and how much is in there, so there is no overeating, so when you finish your meal that’s it,” he said.

Some of Robert’s bestselling entrees, he said, include the shrimp hibachi stir fry, which has a sugar free Yum-Yum sauce that is diabetic friendly and his steak Chimichurri.

“I can’t keep either one of those in stock,” Roberts said.

And in an effort to offer clients a variety of options, Roberts said, he alternates and changes the menu, monthly.

“So the beginning of each month we will change our menu to where we can keep it new and fresh. And of course we do specials every day, and we are constantly trying out new things. I’m testing recipes constantly,” he said.

Creating recipes, Roberts said, “is like art inside of my mind. And I think most chefs will agree. You see something inside your head and you think of it and think about the taste and the flavors of certain ingredients. So that is why it’s called culinary arts. It’s the jumbled mess inside of my head that comes out through my food.”

Roberts is a “self-taught chef,” he said, and prefers not to even being called a chef.

“I like to be called Kevin! I don’t have a degree or anything. I just like to cook,” he said.

“To register, come by the store,” Roberts said which is located at 801 Clay Street to sign up.

“We will then record your starting stats and starting line progress pictures,” he said.

The registration fee is $25 and all information will need to be submitted by Jan. 6.

“Then you have eight weeks to transform your body as much as possible through dieting and exercise,” Roberts said.

Additional contests, prize giveaways and “ultra-secret specials” will be offered throughout the contest to help keep the motivation alive, Roberts said, and final winners will be decided based on total transformation as well as combined inches and weight lost.

“Even though everyone will all be a winner, there will only be one grand prize winner.  Then the top male and top female winners will be the second place winners, followed by the top five runners-up,” he said.

Winners will be announced March 16 at The Old Southern Tea Room during the Finish Line Party for those who endured the challenge.

For more information on the Transformation Challenge or Fit Chef Catering, visit www.facebook.com/FitChefCatering/ or call 601-529-7724.