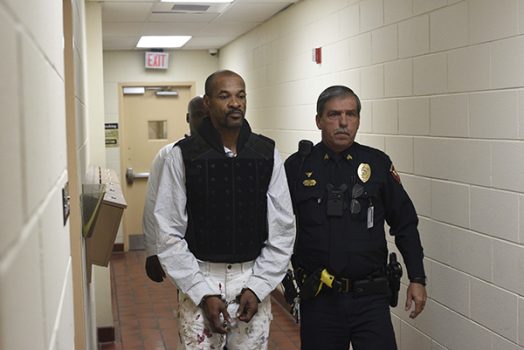 Paul Steward, 51, is lead to municipal court Friday morning for his initial appearance in the murder of his wife, Kacey Miles. Steward was given a $750,000 bond. (Courtland Wells/The Vicksburg Post)

The husband of a woman who had gone missing Christmas Eve made his initial court appearance Friday morning, charged with his wife’s murder.

Paul Steward, 51, entering municipal court wearing a bulletproof vest, was given a $750,000 bond by Judge Allen Derivaux and admitted to murdering 33-year-old Kacey Miles Steward whose body was found Wednesday night in a wooded area of Warren County off Funchess Road.

Sgt. Curtis Judge said Vicksburg police have been questioning Steward since his wife’s disappearance, along with others in the case, but Steward was the only one being held by VPD.

According to Judge, family and friends said the couple had been having marital issues and Steward confessed to investigators, leading them to where her body was located on property Steward’s family owns.

The official cause of death will be determined by an autopsy performed at the state crime lab in Jackson.

The mother of two was reported missing Christmas Day and was last seen some time Christmas Eve.

According to some media outlets, the couple has been married approximately four years and have one child together.

Child welfare services are deciding how to care for the couple’s four-year-old son.