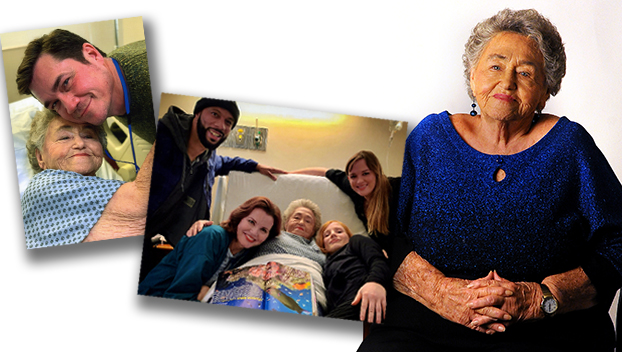 Catherine Virginia Patterson, center, on the movie set with Geena Davis, left, and others during the filming of the movie “Eve” in Boston. At right, director Tate Taylor takes a picture with Patterson. (portrait by Ben Hillyer)

Catherine Virginia Patterson — or “Aunt Jinny” as her friends call her — is literally quite the character after starting her film career at 86 years old.

Patterson said she was raised a country girl in Church Hill and never once dreamed she would become an actress.

“I was 6 years old when I killed my first squirrel,” Patterson said. “I was the only female that hunted there for years. I was one of the boys.”

Patterson became popular in Church Hill for starting “Cypress Camp” alongside her female friends Gran Dee Guedon and Granny Bum — who were “as close as family,” she said.

Apparently, “Aunt Jinny” was already more famous in the community before she knew about it, and before she had ever been on camera.

Two years ago, Patterson said she ran into director Tate Taylor soon after he moved to Church Hill.

“He came knocking on my front door,” Patterson said, “and he said ‘My name is Tate Taylor’ — well that didn’t mean anything to me — and he said ‘I’ve been told I needed to meet you.’”

Soon after that first encounter, Patterson said she noticed an old red Cadillac parked near her father’s store, “Wagner’s Store.” Without knowing the car belonged to Taylor, Patterson said eventually called the sheriff to have the car towed.

“It died on him, so he just left it parked there — and it stayed a week,” Patterson said. “I would look at it every day, but I wouldn’t touch it. It had a California tag on it, so I thought there might be a dead person in it.”

To Patterson’s surprise, Taylor eventually came calling her less than an hour after the vehicle was impounded, she said.

“He said to me, ‘You — you, you’re the one that had my car towed,’” Patterson said with a laugh. “I said, ‘Well how come you didn’t call and tell me it was yours and I wouldn’t have done it.’ … from then on, we were friends.”

Patterson said Taylor and producer John Norris helped Patterson gain a short speaking role in her first movie, a horror movie titled, “Ma,” which was filmed close to home in Natchez and should hit theaters next year.

Patterson’s son-in-law, Eddie Thompson, said Patterson’s character in the film was a salty one, even though she only spoke for a brief scene.

“Norris — the producer — said she just fell right into the character,” Thompson said. “He said she’s a natural.”

In Patterson’s scene, she tells off the films starring actress, Octavia Spencer, by calling her the B-word.

Patterson said she and her daughter, Rose Thompson, were given the royal treatment — complete with refreshments, flowers, guided tours, limousine rides and a view.