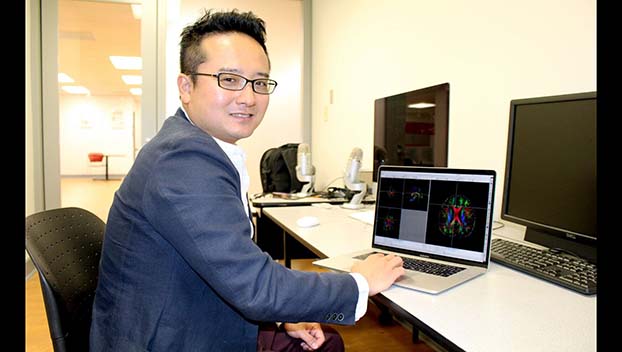 TosOXFORD – Researchers in the School of Applied Sciences at the University of Mississippi have discovered an anatomical link in the human brain associated with impulsivity.

“Impulsivity is the tendency of your behavior to make decisions based on what you see in front of you, rather than seeing the entire picture,” said Tossi Ikuta, assistant professor of communication sciences and disorders and first author of the breakthrough study “White matter integrity in the fronto-striatal accumbofrontal tract predicts impulsivity,” recently published in the journal Brain Imaging and Behavior.

“So if you see something you want in front of you, do you buy it? You would consider your financial situation of this week or this month and make a decision. If you don’t do that and you just buy it – that is high impulsivity behavior.”

“We knew that there is the same structure in humans, too, but we are the first people who extracted this particular tract in humans. We took that part of the brain made by white matter, and we took the strength of this connection, and we compared this with people’s impulsivity.”

“In the end, we have this structure, as you see in the paper. In each individual, we are able to extract this particular part of the brain, which is the accumbofrontal tract, and this, according to our results is associated with impulsivity.”

“We have so many neuroscience studies done in animal models,” he said. “My interest is to translate what we know from rodent or primate studies and translate them into human brain using human brain MRI data that were already collected.

“I have interest in disorders such as Alzheimer’s, schizophrenia, Parkinson’s, autism, ADHD and other neurological or psychiatric disorders. Using brain MRI from humans, I can tell what is different from people with these disorders and without these disorders.”

Ikuta and his fellow researchers in the School of Applied Sciences are dedicated to improving human health and well-being.

“It’s on the way from the bench using animals to (bedside) in a medical practice where we try to use our knowledge for health and medicine.”

“Dr. Ikuta published several other articles in 2018, including one titled ‘Joint attention in Down Syndrome: A meta-analysis,'” said Vishakha Rawool, chair and professor of communication sciences and disorders. “It was published in collaboration with several investigators, including an investigator from our department and three other articles related to the relationship between physical activity and neural function, which were published in collaboration with investigators from the Department of Health, Exercise Science and Recreation Management within the School of Applied Sciences.”

The university community is committed to neurological research through its Flagship Constellations initiative, which seeks to find meaningful solutions through multidisciplinary response to health and social issues affecting Mississippi communities, the nation and the world. One of those constellations is Brain Wellness, which works to develop technologies and evidence-based practices that bolster prevention of and recovery from brain impairment.

Researchers from the School Applied Sciences involved in this Flagship Constellation include Ikuta, del Arco and David H. Holben, professor of nutrition and hospitality management.

“It is very exciting to see the outcomes of applied science researchers involved in translational research in areas that overlap multiple diseases illuminating new areas of knowledge that could eventually lead to more precise diagnostic, therapeutic and preventive protocols that can improve the lives of millions of people,” said Teresa Carithers, the school’s interim dean.

For more information about the School of Applied Sciences, visit http://sas.olemiss.edu/.