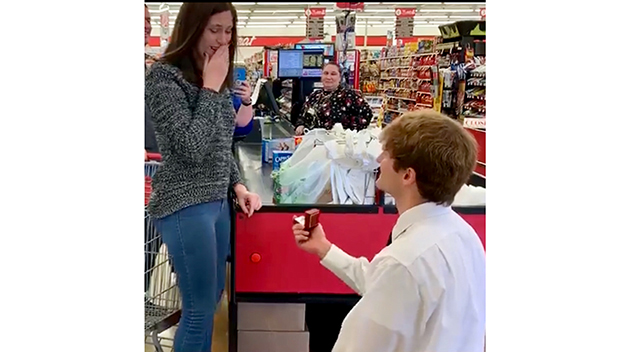 NATCHEZ — In 2014, Dustin Henderson said he was working his first job as a bag boy at Natchez Market II, and one day a young lady who came through the check out line caught his eye.

“She came down the line,” Henderson said. “I’d never seen her before — didn’t know her — she was with her mom, and she was wearing a leotard, so I said, ‘So, do you do ballet?’”

The young lady replied that she did do ballet and that was about it, but Henderson said he was intrigued.

Henderson had a friend at the time who also did ballet, so Henderson said he checked around and found out the young lady from the checkout line was Miranda Allen, who attended Cathedral school. Henderson, who attended Adams County Christian School, said he got Allen’s telephone number from the mutual friend.

“I texted and said something like, ‘Hey, I’m that guy from the Market. You want to hang out sometime?’ She wasn’t creeped out,” Henderson said, adding he eventually asked Allen out on a date.

“I was 15, and he was 16,” Allen said of that first meeting in the checkout line. “He said, ‘So do you do ballet?’ I said, ‘Yes I do.’ I was young and so shy. He scared me. I probably hid behind my mother. By the time he texted me, though, I wasn’t scared. I met him and three days later we were dating.”

The couple has been dating ever since, Allen said, and now they are engaged after Henderson chose to pop the question in a special way.

“He stopped by one day (recently) and asked could I help him with a big favor,” Henderson said. “He had worked for us bagging, stocking, different jobs, and I still see him pretty regularly when he comes into the store.”

The favor, Heffner said, was to help Henderson pop the question to Allen in the same checkout line he had met Allen in back in 2014.

“I thought it was a great idea and from that point on, he laid out what he wanted to do, and we helped him,” Heffner said.

Henderson also worked with his parents, Renee and Thomas “Dale” Henderson, and Allen’s parents, Stephanie and Glynn Allen of Cranfield, to pull off the proposal.

On Sunday morning, Miranda rode with her parents to church at Morgantown Baptist, Miranda said, when her parents said they needed to stop by the Natchez Market.

“I had no clue,” Miranda said. “I thought we were going in to get snacks for church.”

Inside the store, Heffner said he had arranged to have a checkout worker open the lane just as the Allens arrived to check out, so they would go through the exact lane where Henderson and Miranda had met four years earlier.

As Miranda made her way through the checkout lane, Henderson snuck up behind her and said, “So, you do ballet?” and then he dropped down on one knee and pulled out a box bearing an engagement ring Henderson said he had specially made at Netterville Jewelry, using a diamond that Allen’s great-grandfather had brought back from Africa.

Then Henderson said, “Will you marry me?”

Miranda accepted the proposal without hesitation and the whole thing was captured on video that Natchez Market later posted on social media.

“Even when I saw him, I had no clue,” Miranda said. “I’ve been waiting. I was so surprised. It caught me off guard. It’s not what you’re expecting when you go to the grocery store, to be proposed to at the same place we met. It was perfect. I wouldn’t change a thing.”

Allen said the unique proposal was special to her.

“’So, do you do ballet?’ has been kind of a long-going joke with us,” Allen said.

The couple has not yet set a date for the wedding but say they hope it will be sometime next December.

Miranda, however, is going into her third semester of nursing school at University of Mississippi Medical Center in Jackson and Henderson just began working as a Natchez firefighter this month at the main Natchez fire station.

“He is the best thing that ever happened to me,” Miranda said. “God put him in my life and allowed me to run in to him at the Market that day, because that is what was supposed to happen in my life.”