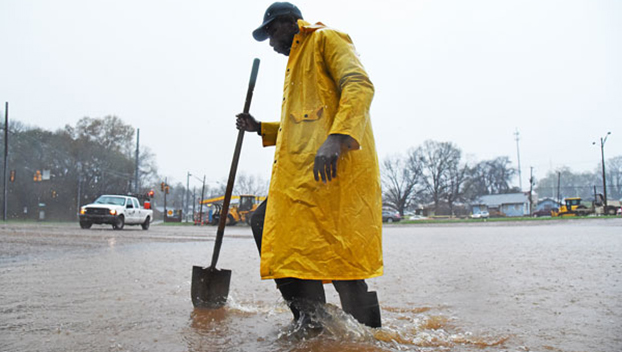 Flooding from the Mississippi River has become more common in January. (File photo)

For the second time in three years, parts of the Mississippi River will go above flood stage in January.

According to the National Weather Service forecast released Saturday, the Mississippi is expected to crest at 44 feet in Vicksburg — 1 foot over flood stage — by Jan. 18. It reached 43.84 feet on Jan. 4, 2016, and 44 feet Jan. 5, 2016, according to Weather Service historical information. The river’s stage Saturday was 40.5 feet.

In Natchez, the Mississippi River is expected to crest at 51.1 feet on Jan. 20 — 3 feet over flood stage.

According to Weather Service predictions, the Ohio River at Cairo is expected to reach 49.5 inches by Jan. 7.

“That’s getting on up there,” NWS hydrologist Marty Pope said, “But we’ve been having these things (high water) more recently, seems like in January, than we used to have.”

“The district has begun and will continue to work with its local, state and federal partners,” he said.

The cause of the Mississippi’s rise, Pope said, is rainfall across the Ohio and Lower Mississippi Valley.

“In the last two weeks, right across southern parts of Illinois and into Missouri, they’ve had anywhere from 2 to 4 inches across there, and then going up the Ohio Valley 2 to 3 inches going straight up the Ohio River itself.”

Also, Pope said, 2 to 4 inches of rainfall in Tennessee west of Nashville during the last two to three weeks drained into the Cumberland River and went into the Mississippi.

Usually, Pope said, the crest will hold for about two days and begin to fall.

“As long as we don’t keep getting rainfall after rainfall and it fills the river up and then it just goes flat on us. We don’t want to see that.

“Luckily, it looks like most of our forecasts are showing some of the rainfall, at least the localized rainfall, is going to go away, but it looks like they’ll get some kind of system across the Ohio that will add another inch or so probably around the seventh or the ninth,” Pope said.

“That’s going to happen after the Ohio River crest — Cairo’s crest — so that probably will not add a whole lot to the river itself, and there’s nothing across the lower valley very significantly over the next seven days at least.”

At 43 feet, Jackson Lane in North Vicksburg begins to flood. At 43.5 feet, Long Lake Subdivision is completely flooded. The Vicksburg floodwall gates at the train depot and the lumberyard gate 8 are also closed at 43.5 feet. At 44 feet, Ford and Kings subdivision at Pittman Road and Mary’s Alley begin to flood.