If social media could vote, Tate Reeves would win the Mississippi governor’s race (at least today) 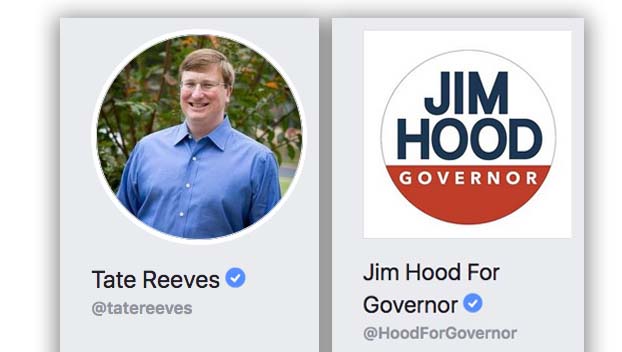 For months, Mississippi political watchers have been awaiting this year’s governor’s race. with current GOP governor Phil Bryant term limited, the office is up for grabs, with the two heavily favored, party front runners Republican Tate Reeves and Democrat Jim Hood set to duke it out over until November.

But while qualifying is still under way, just for fun we thought we’d take a peek at how each campaign is stacking up on social media – which is a poor opinion poll at best, but fun to start a discussion.

A glimpse of their campaigns — and their support — can be had through looking at their social media presences.

In the battle of Twitter, Reeves also is handily reaching more people than Hood with nearly 12,000 Twitter followers to Hood’s nearly 8,000. Throughout the campaign, we’ll check back in and give you all an update from time to time (again, just for fun).

Interestingly, a statewide survey conducted by Millsaps College and Chism Strategies released in October (which could be considered ancient history in political terms) showed 50 percent of Mississippians approved of Hood, while only 37 percent approved of Reeves.

We all know voters are fickle and things can change quickly in elections so stay tuned.