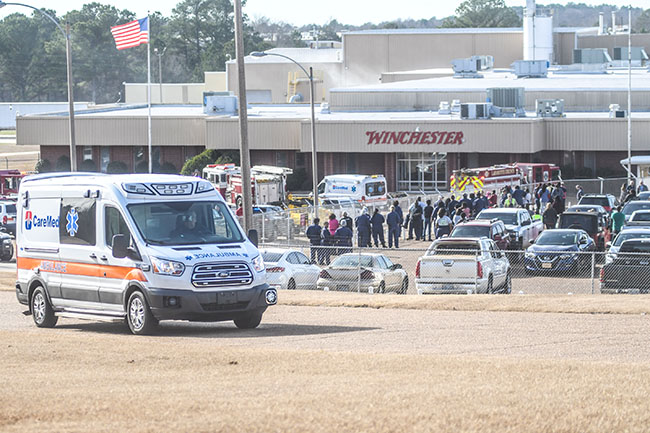 An ambulance leaves Winchester after two ambulances, firemen, and police responded to a call at the plant on Old Highway 7 near Oxford, Miss. on Tuesday, January 8, 2019. Smoke also vents from the roof as employees watch from the company’s parking lot. (Bruce Newman, Oxford Eagle)

An explosion at a Winchester ammunition plant in Oxford Tuesday afternoon injured at least three workers, though none were serious.

Oxford and Lafayette County Departments responded to a call of a small explosion in one of the beams at the Winchester plant at approximately 1:30 p.m., Oxford Fire Department officials reported.

OFD reported no fire was in the building, but firefighters cleared smoke from the building. Three workers were injured in the explosion, and no one was seriously injured, OFD reported.

Those three workers were transported by ambulance to Baptist Memorial Hospital without life-threatening injuries.

Three fire trucks and two ambulances were on scene as workers watched from the parking lot as smoke vented from a section of the roof.

Emergency responders cleared the scene by 2:45, and workers were seen returning to the plant shortly after.