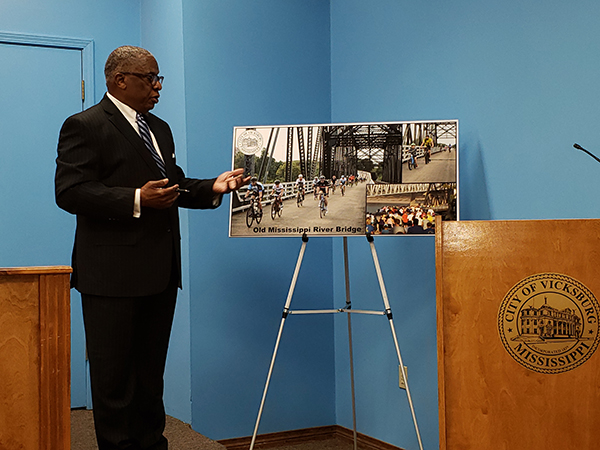 Mayor George Flaggs Jr. uses a photo of cyclists on the Old Mississippi River Bridge to discuss his proposal to open the bridge to the public. (John Surratt/The Vicksburg Post)

Speaking before Monday’s meeting of the Board of Mayor and Alderman, he discussed plans to install a screen to shield the railroad tracks from the road deck on the Old Mississippi River Bridge, and restore and move the Fairground Street Bridge to the proposed park at the farmer’s market site.

Wicker, he said, is expected be named Senate Commerce, Science and Transportation Committee chairman. The committee has jurisdiction over railroads.

Flaggs said the proposed screen is similar to one installed on an old bridge in Memphis, Tennessee. He said the aging bridge and the land around it were converted into a public walkway and park.

He said Jackson-based engineering company Allen and Hoshall, which presently has a contract with the city on another project, provided the design and technical assistance to install the screen shielding the bridge’s railroad tracks from its road deck to make the bridge safe. He did not have an estimate for the project.

“That was 2016; this is 2019. I believe we can do it,” Flaggs said. “My goal this year is to get this open for pedestrians, get it open as a museum, get it to be where people can walk and enjoy life on this bridge. I think that’s going to increase tourism.”

Flaggs said he has changed his mind about razing the Fairground Street Bridge, which is the state’s oldest standing bridge. The bridge is on the National Register of Historic Places and a Mississippi landmark.

He said in December he wanted to demolish the bridge because it was a blight and unsafe.

“I have compromised. I no longer want to demolish the bridge; I want to move it,” he said.

Flaggs wants to meet with Mississippi Department of Archives and History officials about relocating the bridge to the new multipurpose park at the farmers’ market site at the corner of Jackson and Washington streets.

He wants to make the bridge a museum with either a kiosk or informational tablets about the bridge and add a marker identifying it as a National Historic Landmark.

An earlier attempt to relocate the bridge to Washington Street near the Jesse Brent Lower Mississippi Museum and Interpretive Center to serve as a pedestrian bridge from Washington Street to Levee Street was shelved because of the project’s $4 million estimate.

“We’re going to recommend that it be moved to our land adjacent to the Mississippi Barbeque just to enhance the farmers’ market multiplex (park), and see if we can get Kansas City (Southern) to pay for it because they want it out of the way,” Flaggs said.