Tuesday’s Delta quake conjures up memories, concerns about next big one 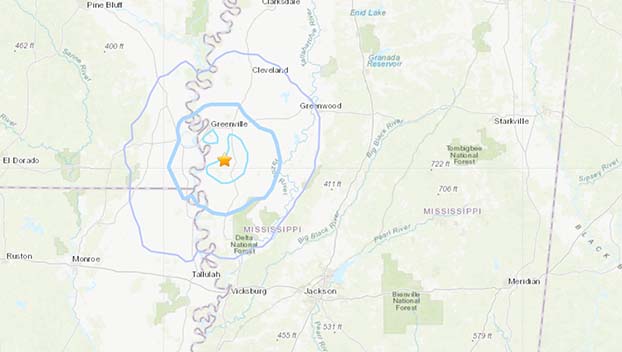 Tuesday afternoon’s minor earthquake just southeast of Greenville in the Mississippi Delta reminded those who felt the shaking that Mother Nature is in charge. The quake also reminded us all that it’s not if, but when another big earthquake will rock the region along the Mississippi River.

It’s happened before. In late 1811 and early 1812, the New Madrid earthquake violently shook the region — multiple times — and famously caused sections of the mighty Mississippi River to appear to temporarily flow backwards. Geologists now think that was merely caused by the ground lifting up beneath the river in some areas and by seismic waves flowing through the water (but it still makes for a good story).

The quakes were named after the river town of New Madrid, Missouri, which at the time was the largest settlement on the river between St. Louis and Natchez, Mississippi.

The quakes — some estimated to have been as great as 7.5 on the now famous Richter Scale — literally knocked people off their feet as the earth rolled beneath them.

The only saving grace was that at the time not many people lives in the area so injuries and deaths were low.

If such a powerful quake were to hit today, no doubt the destruction would be far more disastrous.

The words of the late seismologist Otto W. Nuttli, who wrote about the New Madrid quakes in 1974, is a little disturbing if you live near the area.

“Perhaps the greatest danger of all arises from the sense of complacency, or perhaps total ignorance, about the potential threat of a large earthquake,” Nuttli wrote. “The frequency of occurrence of earthquakes the size of those that took place in 1811-12 is very low; however, continuing minor to moderate seismic activity in the central Mississippi Valley area is an indication that a large magnitude tremor can someday be expected there again.”

But the question is: When will the next big one come? Truth is, no one knows.