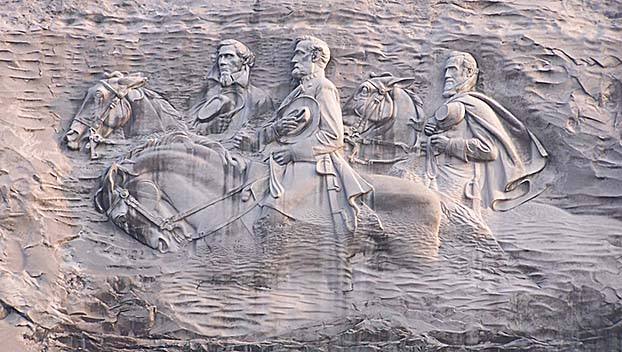 A coalition of civil rights groups in Atlanta plans to use this year’s Super Bowl to help kick off a renewed “war on the Confederacy,” in a fight to remove hundreds of public Confederate monuments around the nation.

The groups on Thursday announced a planned Feb. 2 rally on the eve of the championship football game being hosted in the city.

Gerald Griggs of Georgia’s NAACP chapter said the coalition intends to bring its message to fans from around the world who will pour into Atlanta for Super Bowl 53 on Feb. 3.

“We’ve seen the results of the celebration of the confederacy all around the south and all around the north, but particularly it was brought direct  in context in Charlottesville Virginia, when white nationalists marched twice and ultimately ended in the death of Heather Heyer,” Griggs said. “Since that, we’ve been renewed (with) energy to push this movement forward.”

Griggs said the groups have chosen to take advantage of the world’s attention on the Super Bowl to bring more focus to their cause.

“It’s time to bring the country together by removing these vestiges of the past,” Griggs said. “We will not stop until every single monument to the failed secession, the treasonous occupation and the brutalization of people of color, particularly people of African descent, are removed, placed in a museum in their historical context.”

“In order to enact real change, the local community must have the ability to speak freely about the racist legacy of these symbols, and how they are still being used as emblems of white supremacy,” said Heidi Beirich, director of the Southern Povery Law Center’s Intelligence Project. “These symbols should be understood and placed into their historical context in museums. They should not be displayed without the proper frame of reference in public spaces.”