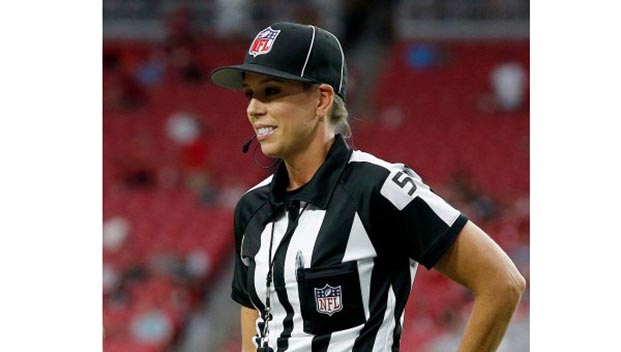 Mississippi native Sarah Thomas will make history when she becomes the first woman to officiate a Super Bowl.

The NFL office announced this week that Thomas will be part of Ron Torbert’s officiating crew for the Los Angeles Chargers – New England Patriots contest at Gillette Stadium in Foxborough, Mass.

Thomas, 46, made history in 2015 when she became the first full-time female official in NFL history. She began her NFL career as a line judge before serving as a down judge the past two seasons.

She was an alternate for the Atlanta Falcons – Los Angeles Rams wildcard game last year.

Thomas was born in Pascagoula and graduated from Pascagoula High School, where she was a star athlete in both softball and basketball. She attended the University of Mobile on a basketball scholarship, earning Academic All-America honors.

She worked her first high school game in 1999 and, in 2006, Thomas was invited to a Conference USA officials’ camp. The following year, she became the first female to work a major college game when she was part of the crew for the Memphis – Jacksonville State game.

By 2013, Thomas was one of 21 finalists for an NFL officiating position. At the time, she worked New Orleans Saints scrimmages and was part of the NFL officiating development program.

Finally, on April 8, 2015, Thomas was announced as the first full-time game official in NFL history. She made her regular season debut on Sept. 13, working the Kansas City Chiefs – Houston Texans game.

Playoff officials are selected largely on the basis of grades issued by the league officiating office during the season. Officials are played into one of three tiers based on those grades.

Tier 1 is considered championship level, Tier 2 is qualified for playoff work, and those in Tier 3 do not get playoff assignments. For conference championships and the Super Bowl, only officials from Tier 1 are considered for assignment.
Thomas now resides in Brandon, Miss., with her husband and three children.