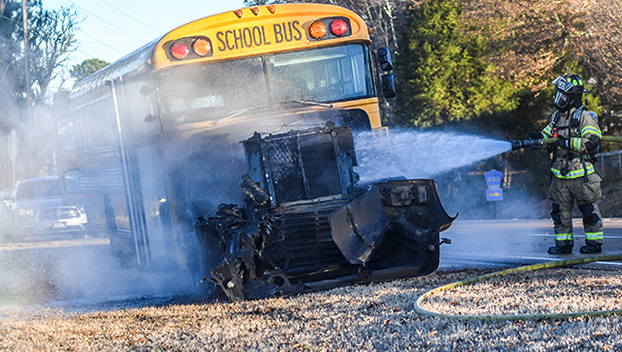 Oxford firemen spray water on a Lafayette County School District bus after it caught fire on Highway 334 outside the schools in Oxford, Miss. on Thursday, January 10, 2019. (Bruce Newman, Oxford Eagle)

OXFORD — No students were injured when a school bus in Oxford burst into smoke and flames as the bus pulled up to drop kids off for the start of the school day Thursday morning.

One of Lafayette County School District’s buses caught fire as it was approaching the high school on Highway 334 at approximately 7:30 a.m. The fire was centered on the engine block as students exited the rear of the bus after it pulled off the road directly in front of the school.

There were zero injuries sustained due to the fire or during the evacuation of the bus as every student exited safely. Oxford Police rerouted traffic while the Oxford Fire Department worked to get the fire out.

School officials tweeted thanks to all who kept the students safe.

Thank you to @OxfordPolice, fire department, and LafCo Sheriff Dept for your hard work this morning. Everyone is safe and the school day is now in session. Thank you for your patience as we made the necessary adjustments.