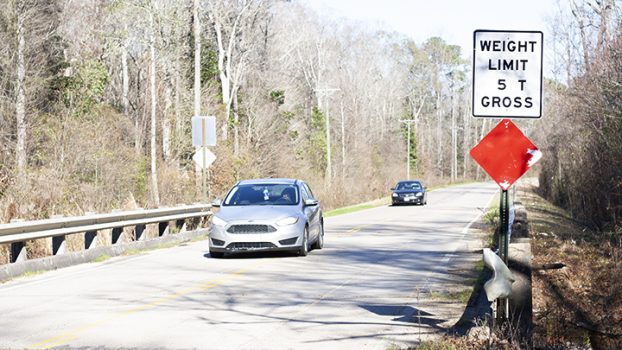 A Lincoln County bridge has developed superpowers and healed itself. It looks that way on paper, at least.

District 4 Supervisor Eddie Brown was amazed to learn Wednesday a small timber-frame bridge over the Big Creek relief channel on Arlington Drive Southwest had its load rating increased after inspection, becoming only the second wooden bridge in the county to grow stronger after a visit from federal bridge inspectors. The short span just north of Shelby Lane Southwest was previously marked down to 5 tons, but after engineers from Volkert, Inc., looked it over late last year, they deemed it safe to carry 23 tons of single-axle traffic and 35 tons on tandem axles.

“That makes you wonder about a lot of these bridges these companies have inspected,” Brown said. “That’s just a slap — to be 5 tons one day, 23 tons the next.”

The bridge is one of dozens of spans held up by timber pilings that have been inspected by firms working on a $31 million contract issued by the Mississippi Office of State Aid Road Construction at the insistence of the Federal Highway Administration, which grew suspicious of local bridge grades in 2016 and ordered new inspections statewide.

The inspections have touched off an infrastructure crisis in Mississippi, leading to hundreds of closed bridges statewide and sending lawmakers scrambling to find new transportation funding. Lincoln County supervisors have replaced, repaired or projected to replace almost 50 bridges since 2017, burning through a $5 million loan intended for paving in the process.

Supervisors statewide have questioned the need for the inspections — two counties tried unsuccessfully to sue Gov. Phil Bryant last year over bridge closures — and bristled at the fact inspectors do not include them or their local engineers in the process.

“We’ve been saying for years that timber bridge inspections are very subjective,” Lincoln County engineer Ryan Holmes told the board Wednesday. “Wood is not homogeneous, and it’s not an exact science on how much a wood piling can hold up.”

Holmes said previous inspections in Lincoln County were done by TRC, but the firm no longer has the contract. The Arlington Drive bridge — made of precast concrete on timber pilings, built in 1995 and carrying more than 700 vehicles per day, according to state aid records — got a second look in October from Volkert, who sent their homework to Holmes this week.

“It’s very subjective when you run the calculations and stamp your name on the report. You can have one guy being really conservative, saying, ‘I’m not sticking my neck out there at all,’ and another inspector may look at it a little different. There’s not a gold standard out there for inspecting timber bridges.”

Holmes said the only other bridge in Lincoln County to grow stronger after a federal inspection runs over a McCall Creek tributary on Wakefield Lane Northwest, just north of Hwy. 84 near the Franklin County Line. That bridge, built in 1997 and carrying 80 vehicles per day, was inspected in September and rated at 18 tons.

The county has 293 total bridges. There were more than 300 before the bridge crisis began, but supervisors have replaced several smaller spans with concrete culverts.