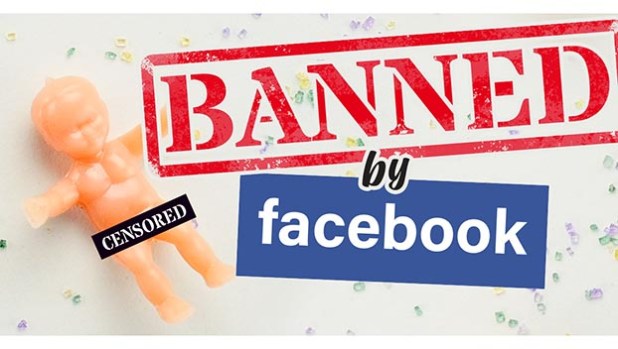 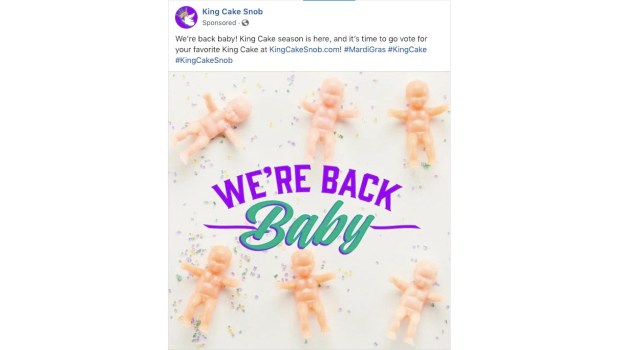 Tiny, plastic, practically featureless king cake babies are simply too outlandish for Facebook’s censors. The very sight of them has been banned. It’s the only decent thing to do, right?

A Mandeville, Louisiana, website called the King Cake Snob reports that an ad the site sought to run on the social network was banned by censors because Facebook said it, “includes an image or video depicting excessive skin or nudity, which includes medical diagrams depicting external organs of reproduction, breasts or butt. This kind of materials is sensitive in nature.”

The King Cake Snob website focuses on rating New Orleans’ famous, ring-shaped Mardi Gras cakes, baked inside is tiny plastic (and nude) baby. Traditionally, the person who receives the piece of cake containg the baby, which symbolizes baby Jesus, is traditionally thought to receive good luck and often is responsible for buying the next king cake.

Generally, no one is offended by the gross nudity of the baby.

“We are shocked that Facebook would censor the king cake baby, one of the quintessential traditions of the Mardi Gras culture,” Jay Connaughton, managing partner of Innovative Advertising, the creators of King Cake Snob, said. “Obviously the folks at Facebook have never tasted the sweet deliciousness of a traditional or filled king cake. If they had, they would understand the deep passion that runs in Louisiana for king cakes of all varieties, and the little babies that live inside them.”

The Facebook post in question included the phrase “We’re Back, Baby” and images of six tiny, plastic babies. The message was simply: King Cake season is here and it’s time for the websites audience to vote on the best king cakes in New Orleans.