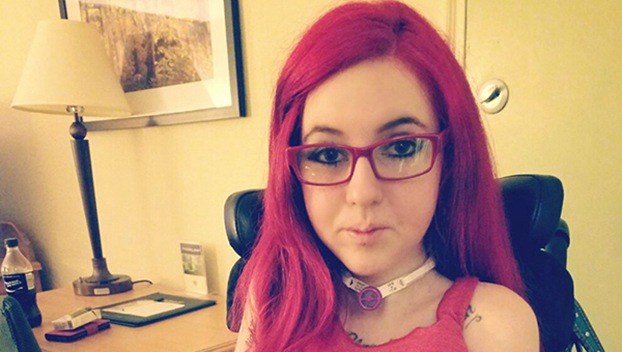 Brandi Toney lives life to the fullest and refuses to let her challenges hold her back. Toney was diagnosed with (SMA) Spinal Muscular Atrophy Type 2 shortly after her second birthday and on Saturday, a blood drive will be held prior to surgery the 27-year-old will undergo in February. (Courtesy of Brandi Toney)

VICKSBURG — What Brandi Toney lacks in physical strength, she more than makes up in will.

Even after being diagnosed with spinal muscular atrophy — a disease that affects the nerve cells that control the voluntary muscles — at 14-months-old, Toney has continued to keep on going even when obstacles try to thwart her way.

“They gave me a year to live,” Toney said, after being diagnosed with SMA.

At the time, doctors were not sure if Toney had Type 1 or Type 2 (SMA), she said.

But after surpassing the two-year timeline, it was determined, she had Type 2 SMA, “And then they gave me eight to 10 years to live,” Toney said.

Now at 27, the Vicksburg native has proven the spirit to live surpasses a doctor’s diagnosis. And to support her in her next challenge, which will be a procedure that could positively alter her life, a blood drive will be held from 10 a.m. to 3 p.m. Saturday, at Toney’s Grill & Seafood Market in Vicksburg.

Toney is scheduled to undergo a surgery in February, she said, that will allow her to receive a cutting edge medication. And during this process, she will more than likely require several pints of blood.

“Since I have double rods in my back, they can’t get to my spine, so they are wanting to put in a port to reach my spinal fluid through my cervical spine and that is where they will inject my treatment,” Toney said.

In 2017, Toney said, a first-ever treatment for spinal muscular atrophy was approved by the FDA.

“And it stops the progression of my disease. My disease is progressive, and it will get worse over time, but this medicine can either slow it down or stop the progression.”

Toney said it could even help her regain a little of her strength.

“My strength is that of a three-month-old. I can’t pick up an 8-ounce can. I’m weak. So hopefully the injections will help me,” she said.

A will to live

Although born with SMA, Toney’s disease did not present itself until she was just over a year old.

“I walked, I crawled, I did everything a normal baby would do until one day I woke up and my mom put me on the floor to watch cartoons and I fell over,” Toney said, “And then she picked me up to put me on my hand and knees to crawl, and I fell on my face.”

Toney said her mother, Debra Barfield Marshall, knew something was wrong and was eventually referred to a doctor in Tennessee.

“They did a muscle biopsy and determined it was spinal muscular atrophy,” Toney said.

Once diagnosed, Toney said, her mother found a neurologist in Jackson where she underwent therapy.

“I did physical therapy, occupational therapy, speech therapy, swallowing therapy. I had every kind of therapy you could have,” Toney said.

And then, after turning two, Toney said her mother approached doctors about her getting a wheelchair.

The doctors were skeptical that a two-year-old would be able to operate a wheelchair, but Toney said her mother persisted.

“They said that I was too young; that I wouldn’t know how to operate it, but she informed them I was in dance with Debra Franco and I had learned my left from my right,” Toney said. “So they put me in a wheelchair, and I did fine.

“I followed my dad down the hallway, turned around and came back. My aunt was there, my mom was there, and they ordered me a wheelchair at age two.”

At 10, Toney’s right lung collapsed and she was hospitalized for months. She eventually got better, but then at age 13 her whole body started to fail and both lungs collapsed.

“I was on life support for two months at the Blair E. Batson Children’s Hospital. My liver, kidneys, everything was failing,” Toney said.

In fact, on Christmas Eve, while Toney was still in the hospital, doctors said she would probably not live to see Christmas.

“They told me the only option was to get a tracheotomy, which is a tube in my neck, so we did that,” she said, since it was the only option for her to breathe on her own.

Toney gave credit to prayers for pulling her through the traumatic ordeal as well as the children’s hospital.

She had been admitted into the hospital for pneumonia and, unfortunately while there, her condition became worse.

“I had just ordered pizza and I was ok, but then all of the sudden I told my mom I didn’t feel good. And she said, ‘You know Brandi, you are kind of pale.’ So we looked at my oxygen level and it was dropping and my heart rate was rising,” Toney said.

Shortly after, Toney said, she lost consciousness and her mother could not wake her up.

“At least that is what my mom told me,” she said.

While unconscious, rapid response was called in and a sternum rub was administered.

“They do this for people who are unconscious. I did not respond,” Toney said. So a CT scan was ordered thinking that she was bleeding out somewhere.

Once it was determined there was no internal bleeding, doctors surmised that it must be one of the antibiotics causing Toney’s red blood cells to attack themselves.

“Kind of like a person with leukemia,” she said.

Toney wound up receiving a pint of blood, which lasted for about half a day, she said, and before coming out of ICU, three more blood transfusions were ordered.

“I don’t think I have ever been that scared in my whole life and I have been through some stuff, but that by far has been the scariest,” Toney said.

And now in an effort to give back for all the pints of blood she used and will possibly need in the future, Toney is encouraging everyone to come out and support the blood drive.

“I have had so many people already reach out to me wanting to schedule times to come and donate blood. This has given me faith in humanity again, and it means a lot that people in my hometown want to support me,” Toney said.