Military man in the daytime, hip-hop artist at night: Mississippi singer wants to influence others in a positive way with his music 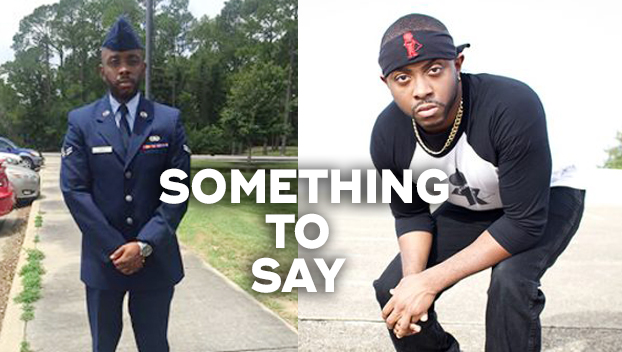 Orlando Jones walks to the beat of his own drummer and is encouraging others to do the same in his new album entitled the “Peer Pressure Project.”

Scheduled for pre-release at the end of the month, the former Warren Central High School drum major said, “I have never been the guy that tried to be like everyone else. I have always been some sort of different.”

“If there is a way I think something could be better or a different way of doing it, I will bring it up. Everybody doesn’t necessarily care for that,” Jones laughed, “but I am all about being innovative and pushing the envelope forward. I never did it in a way to cause trouble. I just always had something to say.”

Following high school graduation, Jones attended the University of Southern Mississippi, where he received a degree in Public Relations and communications.

“I didn’t continue with band while at Southern,” Jones said. “But as far as music goes, I really did start taking a look at possibly making a career in being in entertainment.”

After receiving his degree from USM, Jones said he worked during the day as a teller at BancorpSouth and in the evening sold shoes at the Turtle Creek Mall in Hattiesburg.

“I was also traveling as a musician at the time, too, and it wasn’t as good a vision as I thought it would be,” he said.

“I thought ‘I didn’t go to school for four years to be working this hard,’ so I started weighing my options,” and with nothing to lose, Jones said he enlisted in the Air Force.

Jones said his mother and father helped influence his decision.

“Both my parents were in the military. My dad, Orlando Sr., was in the Air Force and my mom, Lori Thomas, was in the Army,” he said.

Currently, Jones is serving as a Senior Airman at Hurlburt Field, which is a special operations base located in Florida. His assignment, he said, is much like that of someone who works for the fire department, meaning his hours are 24/7.

And because of his time constraints, Jones said, it can be challenging to set aside time for his musical aspirations.

However, the military has given him opportunities to sing the National Anthem at several ceremonies with ranking officials, Jones said, “All the way up to two star generals.”

Jones said he has also been able to speak publically at events, which has allowed him to grow his passion of motivating “peace, prosperity and positivity.”

And in conjunction with this message, Jones said the music on his album was designed in the same spirit.

“None of my music has any profanity in it, and I have never put out any music where I am using derogatory language or speaking ill of another person,” he said.

All goes BACK to WCHS

Jones credited his desire to continue to pursue a career in the entertainment and musical fields to his high school training.

“Simply put, while I was in high school, I was allowed to diversify my musical talent and I was also exposed to different types of music,” Jones said. “I was learning music from different angles aside from just the performance aspect and this gave me a greater appreciation for it while also encouraging me to want to learn more about music and dig deeper.”

And in addition to his musical endeavors, Jones also had a cameo role in the James Brown biopic “Get On Up” where he played a drummer, and he was cast in a regional film, “The Hollow” that was directed by American film, television actor, writer and producer Miles Doleac.

The music video release of Jones’ album, the “Peer Pressure Project” will roll out on Jan. 21, and the music will be available on major streaming services Feb. 1, he said. The Vicksburg native has also set a personal goal of selling 1,000 albums by Feb. 7.

“I have released some music to the online community in the past, but I didn’t have a specific goal. This year I would like to make a charge to the city and to all of my friends and family and to people they may know to support a positive movement to help me reach my first weeks’ sales goal,” Jones said.

For those interested in getting a jump on the album, pre-sales will be available Jan. 25, for $3.99, Jones said, with two of the 10 songs on the album accessible prior to the Feb. 1 release.

Jones described the music on the album as having a hip-hop — R&B — pop sound.

And although Jones wrote all the lyrics to the songs, his 16-year-old nephew, Tommy Curtis III, helped him produce the album.

“Learning that he (Curtis) also has a passion for music blew my mind,” Jones said of his nephew.

And if that wasn’t enough, Jones said, when he found out how the younger family member became interested, “My knees buckled.”

“I asked him (Curtis) one day why is it that he wanted to do music and he said it was because of me,” Jones said.

“I have never let go of that moment. It has made me realize everybody is watching. They may not tell you and you may not ever know it, but somebody has their eyes on you, so it is important that you present yourself in the correct manner,” Jones said.

In addition to his military service and his musical aspirations, Jones said he would also love to return to Vicksburg as a motivational speaker.

“I would like to go and be a part of high schools and elementary schools with the message that you do not have to be like everyone else to be successful,” he said.

To help Jones reach his goal of 1,000 albums, download the album on most major music streaming services by typing in jones-peer pressure project.