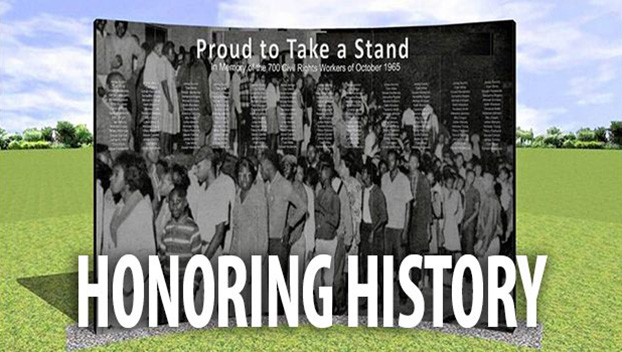 NATCHEZ — Plans to build a monument that commemorates an important piece of Mississippi civil rights history will soon come to fruition after Natchez aldermen agreed earlier this week to start engraving the granite portion of the monument.

The decision, officials said, was made after approximately $43,000 had been raised for the project.

Plans for the “Proud to Take a Stand” memorial, the design of which was officially unveiled in November 2017, include a 6-foot-tall, 12-foot-long monument with more than 150 names of protestors who were unjustly sent to the state penitentiary at Parchman in 1965 for violating a city ordinance banning parades.

The ordinance was later ruled unconstitutional.

The monument also will bear a narrative that includes the city’s resolution passed half a century later apologizing for the events that occurred in 1965.

Organizers plan to place the monument at the corner of Canal and Jefferson streets near the Natchez City Auditorium, where the protestors were held before being transported to the penitentiary.

Part of the city auditorium grounds will be converted into a plaza surrounding the monument.

The completed project has an estimated cost of $115,000 or less, said Natchez Mayor Darryl Grennell, who initially proposed the city, county and state each fund a third of the cost.

To start the engraving process, the city needed a minimum of $35,000, Grennell said, and the city allocated approximately $38,000 toward the monument over a year ago out of a percentage of gaming revenue the city receives from the Magnolia Bluffs Casino on an annual basis. Another $5,000, Grennell said, came from donations from individuals and proceeds from a benefit concert.

Grennell said he met with state Sen. Tammy Witherspoon, D-Magnolia, last week, and Witherspoon told him she would introduce a bill to have state funding allocated toward the monument; however, county officials have said they were not legally able to contribute funding.

“It’s not that we didn’t want to,” Adams County District 2 Supervisor, Calvin Butler said. “We called to get the attorney general’s opinion on it, and legally we couldn’t do it. … State legislators haven’t really committed to it either. … They would first have to approve a one-time appropriation of funds … but it’s not definite that it would get approved.”

Adams County attorney, Scott Slover, said he’d received a letter from Attorney General Jim Hood, which cited a state statute that would not allow the county to contribute to a civil rights memorial.

“Unfortunately, as written, Section 19-5-93k only allows public funds to be used tor building memorials relating to the two world wars,” the letter states, “and, thus, would exclude memorials for those involved in the Civil Rights Movement.”

Slover said a donation would require a change in the state’s constitution.

“It would be up to the state Legislature to pass and approve that type of donation,” Slover said. “To my knowledge, nothing has been presented to do that, but I would imagine other counties in Mississippi have desires to have such a monument as this one. …  It would make sense (for the state) to allow donations for that to happen.”

Since then, Grennell said an additional $5,000 had been raised from various donations from both community and out-of-town supporters of the project.

“We’re making an aggressive campaign to go out and raise the rest of the money,” Grennell said. “We’re setting up a GoFundMe page that will be launched by the end of the month. We’re also going to all of the churches in the community, requesting the membership there to contribute toward this.”

Grennell, whose father was incarcerated in the Parchman penitentiary during the ordeal, said he felt emotionally obliged to see the project through.

It would take up to six months to carve out the granite and finish the inscription, he said, adding that he hopes the money could be raised for the landscape work at the monument site before then.

“It’s my personal mission to have a dedication for this monument before the end of the year,” Grennell said.