Should Mississippi be proud or shameful of Robert E. Lee love affair? 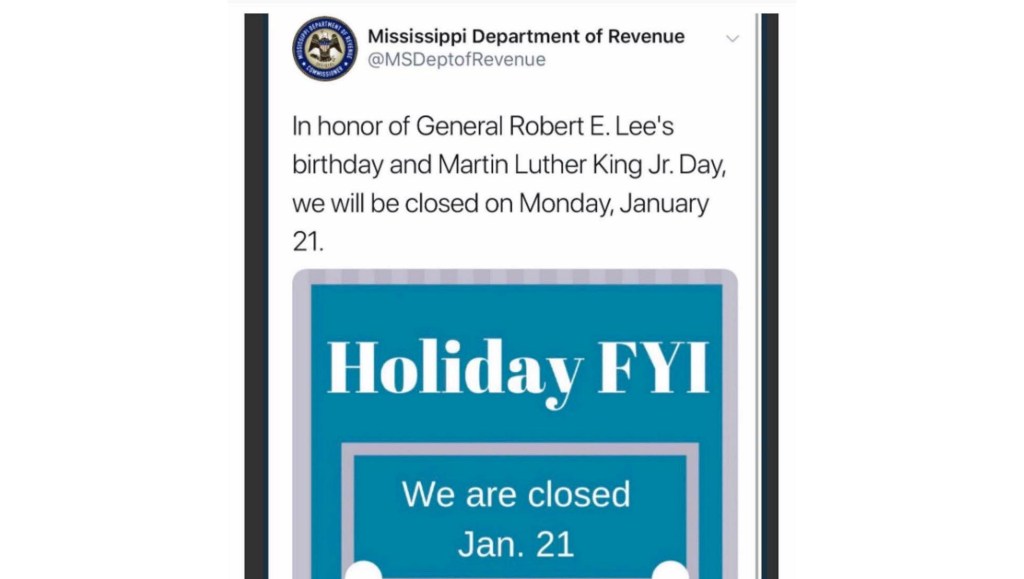 You’ve heard the difference between Mississippi Baptists and Mississippi Methodists right? The Methodists will speak to one another at the liquor store.

That old stereotypical joke came to mind this week after a Mississippi state agency did the equivalent of shamefully looking the other way in the liquor store this week.

The Mississippi Department of Revenue came under fire this week after posting on social media at its offices would be closed Monday “In honor of General Robert E. Lee’s Birthday and Martin Luther King Jr. Day.”

The holiday to honor the legacy of civil rights icon King is a federal one. The simultaneous celebration of Lee’s birthday is simply a state holiday.

Mississippi and Alabama are the only state that celebrate Lee’s birthday on the same day as Martin Luther King Day.

Critics bashed the action online, pointing out lack of explanation on why the tweet was deleted and pointed out that the author chose to list Lee’s Confederate Army rank, but failed to include King’s Ph.D.

“It is one thing to be dumb as a turnip; it is quite another to advertise it,” one commenter wrote.

“Deleting your racist tweet won’t make it go away,” another wrote.

“This is why I’m nearly embarrassed to say I’m from MS,” wrote a third.

The outrage and the immediate removal underscores the contradictory nature of a state that has a formal state holiday to celebrate a Confederate general, but cowers at the controversy of having that holiday questioned.

So which is it, Mississippi?

Do we love Robert E. Lee enough to celebrate his birth with a holiday or do we recognize that if mentioning his name in the same breath as Dr. Martin Luther King is blasphemy to many residents then perhaps Lee isn’t worthy of recognition.