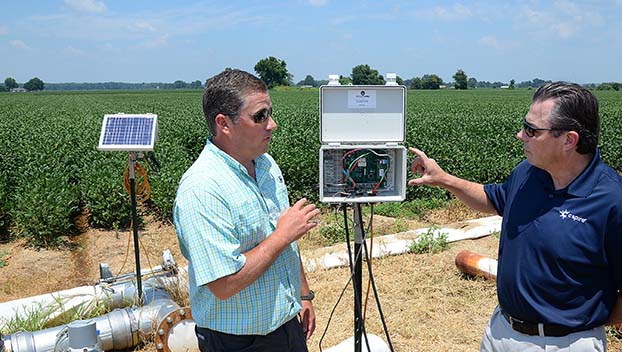 Technology has often proven better than human know-how in many career fields.

A recent agricultural test on a farmer’s field in the Mississippi Delta proves technology can improve agriculture, too.

Results of an agricultural proof of concept test recently released showed automated irrigation techniques not only saved millions of gallons of water, but also dramatically improved corn and soybean yields per acre.

The test was part of C Spire’s Tech Movement initiative, launched in 2017, to use its technology know-how to expand its business and help Mississippi move forward at the same time.

“We have the resources, partnerships and professional expertise to help farmers be successful as they transition from a labor-intensive, high-risk, low-reward industry to one that relies on 21st century technology to feed the world and conserve our precious natural resources,” said C Spire President Stephen Bye. “Automation and analytics are the key factors that will help us deliver on that promise.”

“We’re really encouraged by the results that showed a dramatic decrease in water usage – about 15 million gallons – with increased yields and profits,” said Phillips, owner of JF Phillips Farms. “There are a lot of variables in growing these crops, but this solution controls risk and manages the resources to produce great results.”

PrecisionKing plans a commercial introduction of the service in time for the 2019 growing season, King said, noting that an optimal watering schedule helps retain nitrogen content in the soil, boosting yields and dramatically reducing water usage.

Agriculture is Mississippi’s leading industry sector with more than 36,300 farms working 10.7 million acres, much of it in the Delta.

Agriculture’s reliance on water, particularly in the farm-rich Delta region, has led to declining groundwater levels and worries about depletion of its deep groundwater alluvial aquifers. Gov. Phil Bryant and other state leaders and federal agencies formed a task force in 2014 to address the problem and develop solutions.

The industry sector employs 29 percent of the state’s workers and generates over $6.7 billion annually for the state’s economy.