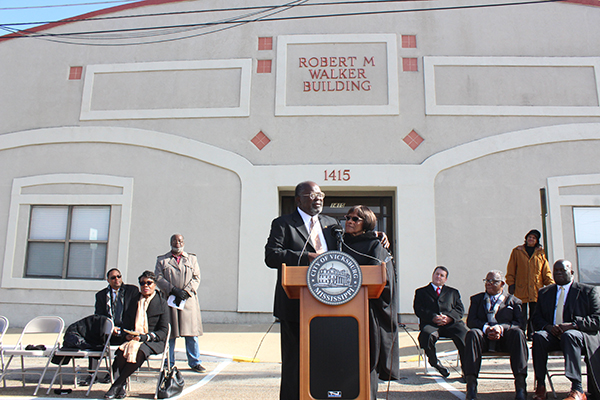 All too often groups honor people after they’re no longer around to enjoy the accolades. This week, the City of Vicksburg honored its longtime mayor the right way — while he was here to enjoy the honor.

The legacy left by former Mayor Robert Walker was honored Monday with a ceremony renaming the City Hall Annex in his name.

“I think its wonderful,” Walker’s wife Sylvia said after the ceremony. “He had worked so hard over these years, it didn’t matter if someone needed or didn’t need him. He’s a good man. He stepped in and did what he had to do.

“This is the best thing that’s ever happened to him, and we’re just so thankful to the citizens of Vicksburg and the Mayor, George Flaggs, and the aldermen.”

More than 100 people ignored the cold and windy conditions Monday morning to gather on Washington Street to watch the unveiling of the annex’s new name.

“Robert Major Walker, I owe you the highest apology for running against you in 1997,” Flaggs who challenged Walker in the 1997 mayoral election, said in his opening comments.

“That was a turning point in my life, and I decided then that if I ever got the opportunity to pay this man back in the highest way I possibly could, I wanted to name something that would mark and describe history for this man from this day forward,” he said, adding Monday was declared Robert M. Walker Day.

“I had the opportunity to see what Mayor Walker had done in the past, and I’ve got to tell you, to be in politics over a period of time and at the end of the day, if you pull it (information) up and all they say is good things about you, that’s significant,” he said. “It’s an honor for me to stand up here with the mayor and do this.

“We appreciate what you did and what you’re going to do, and thank you very much for your service.”

Everett Ward, 35th general president of Alpha Phi Alpha Fraternity, of which Walker is a member, said it was “fitting that we pay tribute to a man who gave his all for the betterment of the citizens of Vicksburg, the citizens of Mississippi. He is continuing a legacy.”

Walker’s brother Michael said his family “has had to share Robert Major Walker with everybody. He was blessed to be a part of us, but he was actually a part of everyone’s lives he came in touch with. I don’t think he ever did anything for himself; it was never for personal gain.

“He’s been someone I’ve always admired, respected, loved (and) looked up to. Everybody had something good to say about him.”

After the unveiling, Walker, accompanied by his wife, told the audience, “It may have my name on it, but it’s a building for the people.”

He said he wanted to be the kind of mayor who, if people didn’t like him or didn’t vote for him, “Would respect what we were doing.”

He credited his staff and his supporters for their assistance in making his administration successful.

Walker won a special election in 1988 to fill the unexpired term of Demery Grubbs, who left the city to work for the Mississippi Municipal League. He won a full term as mayor from 1989-1993, and served as mayor again from 1997-2001.

He also served as a field secretary for the NAACP for five years and was co-founder and coordinator of the Mississippi Legal Services Coalition for four years.