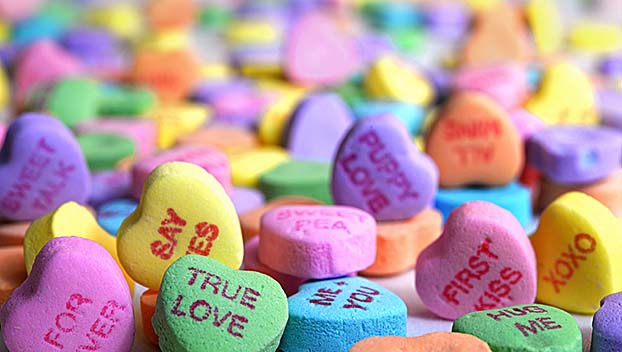 Valentine's Day will not be the same this year with the absence of a decades old tradition — Sweethearts. The company that made the tiny conversation hearts went out of business last year.

A sweet Valentine’s Day tradition is about to jilt America, standing us all up at the time we most need a little PUPPY LOVE.

Sweethearts, the tiny candy hearts emblazoned with Valentine’s Day messages for those of us who couldn’t muster up a “BE MINE” or a “CUTIE PIE” for someone they love, will be taking the holiday off this year.

The company that made the little literary sweets, the New England Confectionary Co. (NECCO), went out of business last year.

The company’s doors closed in July 2018 after more than a century in business. The company also produced NECCO Wafers, Mary Janes and Clark Bars.

The website candystore.com reported that Sweethearts was the most popular Valentine’s candy, traditionally bringing in approximately $1.8 billion in annual sales.

Candystore.com estimated that the company produced approximately 8 billion of the tiny hearts each year, that’s 19 million pounds of the conversation hearts.

Eventually the Spangler Candy Company wound up owning the factory.

Spangler reported they simply did not have time to create the candy for the 2019 Valentine’s season, but that they would be back for 2020

“We are looking forward to announcing the relaunch of Sweethearts for the 2020 Valentine’s Day season.”

But for now those who simply cannot muster the words to share with their would-be Valentine will have to either buy old stock — available online for a premium — or resort to, (gulp), actually talking.

That’s enough to make you want to hold up a tiny heart – MISS YOU.

This year’s halt ends a long history of the company’s sweet word messages.

Spangler’s website indicates the modern day Sweethearts date back to 1902.

What was your favorite Sweethearts candy message? Send us a note using: https://www.magnoliastatelive.com/services/submit-a-news-tip/