Blown call against Saints marked as ‘scene of crime’ 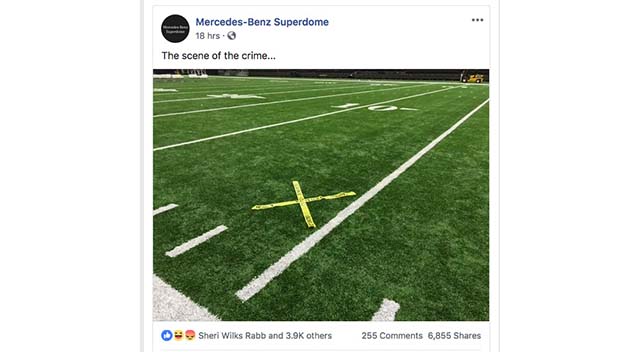 The blown call. Like the shot heard around the world which started the American Revolutionary War, the late fourth quarter missed pass interference call in the NFC Championship game between the New Orleans Saints and the Los Angeles Rams has reverberated around the football globe.

On Tuesday the Mercedes-Benz Superdome posted a photo of the spot on the field the missed infraction occurred with a simple line: The scene of the crime…

Saints fans are not giving up their fight, though likely fruitless, it’s part of the mourning process of a season dashed by a botched call that would have have given the Saints a first and goal with less than two minutes on the clock. A simple score would have sent them to the Superbowl. Instead the game went into overtime and the Rams won.

Saints fans are ticked and for good measure. They got robbed. Anyone can see that from the footage. But worse, they’re being ignored by Goodell who hasn’t said a word in response despite pleas from fans, owners, the New Orleans City Council and even Louisiana Gov. John Bel Williams.

In a letter to Goodell, Williams wrote “We will move on from this game, but we will not forget it.”