Camels in the Civil War? Mississippi author pens book about history of great-grandfather and the 43rd Mississippi’s most famous member 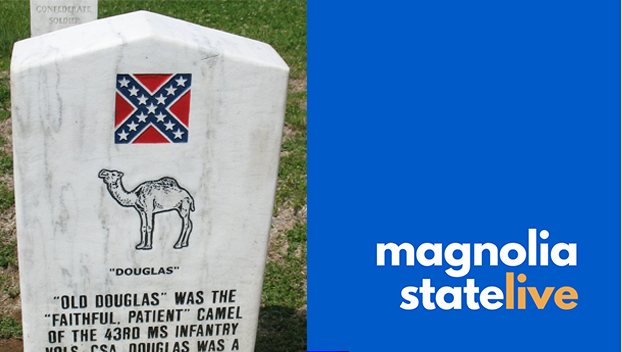 VICKSBURG — When W. Scott Bell was researching his family’s history, he came across information about his great-grandfather John K. Bell that led to a book — a book about the Battle of Vicksburg and it most famous dromedary.

Bell’s Book, “The Camel Regiment: A History of the Bloody 43rd Mississippi Volunteer Infantry, CSA 1862-65,” is the story about his great-grandfather’s Confederate Army unit.

“This is a story about a group of men and their experiences,” Bell said during a program and book signing recently at Lorelei Books.

The 43rd, he said, fought at the siege of Vicksburg and other conflicts during the Civil War.

The book covers the unit’s history, including stories about its participation in the battles of Atlanta, Georgia; Corinth; Franklin and Nashville; Tennessee.

And he writes about the 43rd’s most famous member, the camel named Old Douglas, for which the regiment is best remembered.

Contrary to what many have believed, Bell said, Old Douglas was not one of the camels brought to the U.S. for then-Secretary of War Jefferson Davis’ experiment to see if camels would be useful in the American southwest.

Old Douglas, he said, was one of a group of camels brought to Mobile, Alabama, for sale as domestic animals.

“It was an experiment to see if camels could be used for plowing and other uses on the plantation,” Bell said. Douglas was purchased by a planter in North Mississippi for use on the farm. When the Civil War broke out, the planter joined the 43rd Mississippi and gave the camel to the commanding officer.

“He was used to carry the band’s instruments and backpacks,” he said.

Old Douglas was killed during the siege by a Union sniper.

Bell said he wrote his book to let people know about his grandfather’s unit beyond Old Douglas.

“The history of the 43rd has never really been told,” he said. “My great-grandfather’s story inspired me to find out more about the 43rd and the more I found out the more interesting it was.”