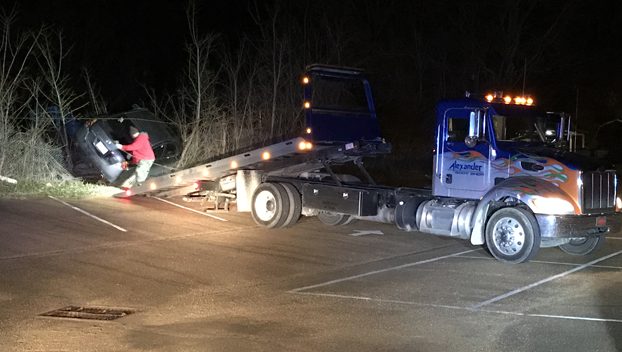 A tow truck operator works to remove a car that was crashed in Adams County late Saturday by a juvenile authorities said led law enforcement on a high-speed chase through two counties. (Submitted picture)

Franklin County Sheriff James Newman, said deputies responded to a call in reference to a car stolen from a residence in Bude sometime before midnight Saturday.

The vehicle, a Nissan Altima, was spotted traveling west on U.S. 84 toward Natchez when Franklin County deputies began a high-speed pursuit, Newman said.

“The Adams County Sheriff’s Department was right on top of things, too,” Newman said. “They brought it to a conclusion when the (driver) wrecked. … Those deputies did a professional job helping us take care of business.”

Newman said the driver, a 16 to 17-year-old white male, was taken into custody and transported to the Adams County Juvenile Detention Center.

“When he hit Adams County, we could hear the distress in the officer’s voice when he called through dispatch for help,” Patten said. “This guy was driving up the wrong side of the highway, and that created a whole new level of urgency when it came to this pursuit. We wanted to make sure no other driver was hurt.”

Patten said when deputies initiated blue lights and sirens to stop the driver as well as warn oncoming traffic, the suspect attempted to turn around to travel toward Vicksburg but instead drove into the parking lot at Immanuel Baptist Church and ran into a fence by Rayborn Drilling Co., causing the vehicle to go airborne.

“At that point, he was stuck in the car,” Patten said, “and the (Adams County Sheriff’s Office) Special Operations Group, our deputies and a Franklin County deputy were able to take him into custody without any further incident.”

Patten said he was grateful that the subject was apprehended without anyone being hurt or killed.

“He wasn’t hurt at all, and — truth be told — I thank God that the young man is alive,” Patten said. “I’m really thankful that no one was hurt during this pursuit. … Before he hit our county, he was traveling at speeds in excess of 100 miles per hour. There was no way we were going to let him come through here while driving that recklessly.”

Patten said the conclusion of Saturday’s high-speed chase was the result of deputies “flawlessly” executing their training.

“This is why we send deputies through the level of training that we do,” Patten said.

“When people’s lives are at stake … that’s when that quality training really pays off — for the community, the deputies and all of the people we serve. Quality training matters. Quality people matter. … Those deputies executed what they were supposed to do flawlessly.”