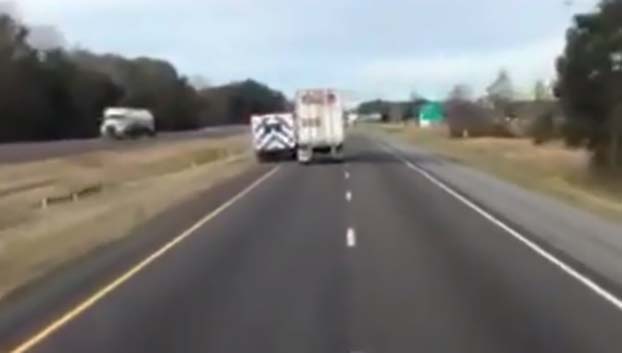 An interstate highway through Mississippi was shut down for hours Wednesday after a truck driver with a machete sparked a standoff with police after running several motorists off the road in what appears to be road rage, but the incident ended without injuries when he was finally arrested.

News outlets reported officers used tear gas to force the suspect out of the truck. The Mississippi Highway Patrol said there were no injuries.

The situation began shortly after 9 a.m. when authorities in Alabama gave chase to an 18-wheeler. That chase continued into Mississippi, coming to an end at mile marker 61, about 16 miles (26 kilometers) west of the Mississippi-Alabama state line.

As police negotiated with the driver, the interstate had to be shut down, causing major traffic delays across south Mississippi. It was re-opened just before 2 p.m. after the man was arrested. In custody is Michael Troy Mack, 33, of Baton Rouge, Louisiana. He faces one count of felony pursuit in Jackson County. It was unknown if he has an attorney.

Mobile County Sheriff’s Office spokeswoman Lori Myles said the pursuit started after a report from a truck stop about an 18-wheeler intentionally striking an ambulance on Interstate 10.

EMS personnel told investigators they saw the tractor-trailer driving recklessly and contacted authorities, Myles said in a statement. Whenever emergency personnel approached, the driver would get angry and veer toward them, causing damage to the ambulance, she said.