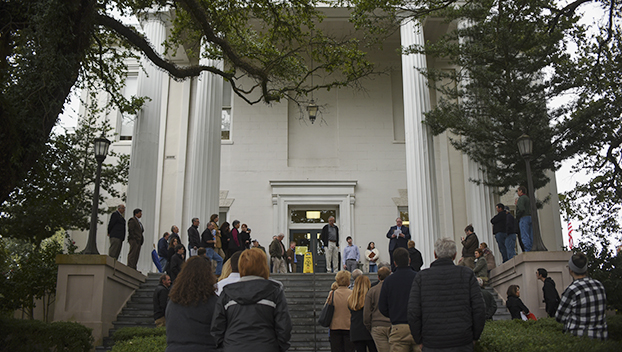 Natchez lawyer Bruce Kuehnle stands at the top of the Adams County Courthouse steps to auction off the Dunleith property Friday. (Nicole Hester / The Natchez Democrat)

As several dozen onlookers watched, one chapter in the more than 160-year history of antebellum Dunleith was closed, with another chapter yet to be written.

United Mississippi Bank foreclosed on the storied mansion from which Dunleith Historic Inn and The Castle Restaurant operated after no one else placed a bid in a foreclosure auction.

The bank, which had enacted foreclosure proceedings in an attempt to recoup money the bank had loaned to Dunleith’s former owner, set a minimum bid of $4.7 million for the property.

“Since there were no other bidders, we simply foreclosed,” bank CEO Adrian Sandel said. “Today, we simply took possession of the property.”

The bank’s bid was the lone bid made before a crowd of spectators Friday afternoon on the steps of the Adams County Courthouse.

Free of the stigma of the bankruptcy and foreclosure, the bank can now seek to market and sell the antebellum mansion set on a palatial estate.

“The bank is working with the current management on plans for the property,” Sandel said. “Our goal is 100 percent to sell the property. There are still a couple of interested prospects (would-be buyers). We need to see if any of those comes to fruition.

Technically, the bank did not acquire the businesses that were operating at the facility, but simply foreclosed on the property itself and other fixed assets on the site, Sandel said.

“The bank didn’t acquire the company, Dunleith Plantation LLC, but the bank took possession of the building and its contents.”

Dunleith’s sale was the final of three businesses that were entangled in owner Michael Worley’s personal bankruptcy case. United Mississippi Bank claimed in court that Worley owed the bank $7.3 million.

A federal judge’s ruling in December cleared the way for the bank to foreclose in an attempt to recoup its money.

Worley filed a personal bankruptcy under Chapter 11 codes on Jan. 8, 2018, citing more than $107 million in liabilities, with just more than $80 million in assets.

Bowie’s Outfitters was sold in September to Roberts and Knost Investments, an LLC formed in August. The LLC shares a Baton Rouge address with the Excel Group, an industrial construction firm, owned by David Roberts.

Dunleith was built in 1856 and has been operated as a commercial bed and breakfast facility since 1976. Dunleith currently has 22 luxury rooms available for overnight guests and has been the venue for many weddings and large parties throughout the years.