Missing teen mom and child may be in Southwest Mississippi 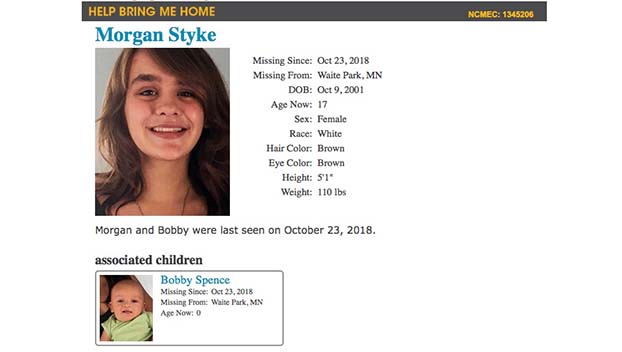 Investigators believe a teenage mother and her child reported missing from Minnesota since October may be in southwest Mississippi.

The National Center for Missing and Exploited Children (NCMEC) and the Waite Park (Minnesota) Police Department have been search for Morgan Styke and her 9-month-old son, Bobby Spence.

The pair were last seen Oct. 23 after she failed to show up for work.

NCMEC said new information indicates the pair may be in McComb. The child’s father, 19-year-old James Spence, was supposed to return the child to his mother after work, but did not. Authorities believe the three or together.

A news release issued by NCMEC indicated law enforcement is concerned about the well being of Styke and her son. They believe the pair could be driving a white pickup without a tailgate, but could also be switching vehicles. Authorities reported they believed the pair could be in the McComb, Mississippi, area or in Texas.