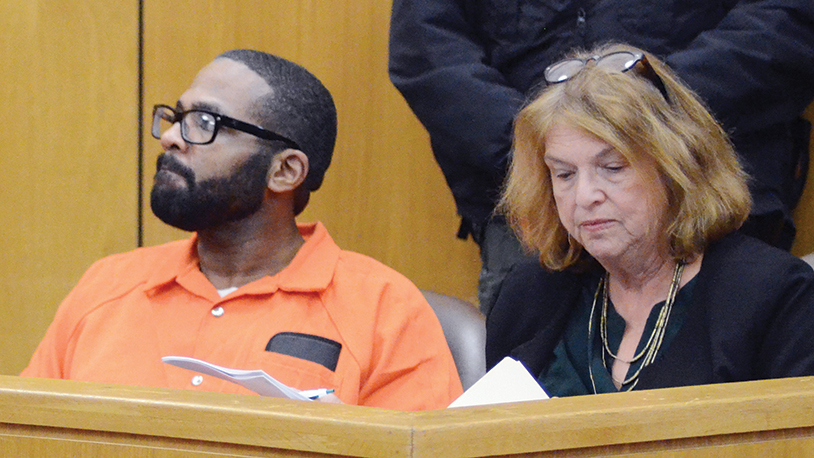 Attorneys for Willie Cory Godbolt, accused of murdering eight people including a Lincoln County Sheriff’s deputy in 2017, are asking the court to allow their client to skip the jail garb for proceedings in favor of civilian attire.

Godbolt is charged with four counts of capital murder, four counts of first degree murder, two counts of kidnapping and armed robbery. He was formally arraigned in Lincoln County Circuit Court March 12, 2018, and his lead attorney, Alison Steiner, has also asked that only one media representative be allowed to take photographs, which would then be shared with other media outlets.

Circuit Court Judge David Strong will make a ruling on both motions Tuesday at 1 p.m.

A second hearing is set for Feb. 22 at 9 a.m. for Strong to make a ruling on several motions filed by the Jan. 10 deadline.

Since the state has announced its intent to seek he death penalty for Godbolt if he is convicted, Steiner said the defendant’s appearance in the courtroom “must accord him all the same dignity and respect as any other courtroom participant.”

Because he is of high press and public interest, his appearance will be “significantly scrutinized and photographed and those images will likely be distributed statewide,” she wrote in the motion.

Steiner said since Godbolt has been compliant with all orders and is securely guarded, he should be allowed to change into civilian clothing at the courthouse before proceedings.

She also asked for pool video and still cameras for press coverage to reduce the number of images taken of her client in the courtroom.

Other motions made by Steiner and Jason Tate with the Lincoln County Public Defender’s office include:

• Motion to use the “Stennis Method” to select jury, where the prospective jurors are divided into panels to be questioned as opposed to being questioned individually or as a whole.

• Motion for severance of multi-count indictment.

• Motion for change of venue outside of Lincoln County and other “similarly tainted” counties as a result of media coverage and also that friends and family of the victims live in adjoining counties.

• Motion to preclude the imposition of a death sentence in the event of a conviction.

• Motion to keep the victims’ family and friends from sitting near the jury and showing emotion in the courtroom during the trial.

• Motion to prohibit a uniformed police presence in the courtroom or any place where jury or prospective jurors may be present, and bailiffs not be allowed to take jurors to businesses or venues that display memorial tribute materials or other displays about the victims in this case or other fallen police officers.