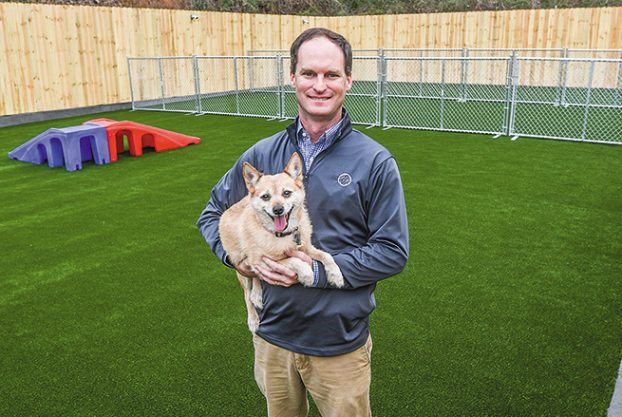 Chip Brown is the owner of Delta Dogs, which is located onUniversity Avenue in Oxford, Miss. on Monday, February 4, 2019. (Bruce Newman, Oxford Eagle)

When Chip Brown was a student at Ole Miss he had an idea of bringing luxury care for dogs to Oxford. While the idea lingered in his head he opted to go into commercial real estate instead. That lasted for about eight years until 2007 when he opened the Brown Dog Lodge in Memphis, turning his hobby and love for dogs into his full-time career.

Now, 12 years later and after selling off his two Brown Dog Lodge locations in the Memphis area, Brown has returned to Oxford to see his idea from college come to life with the opening of Delta Dog. It is a luxury pet hotel, daycare and spa for man’s best friend that offers amenities some might not find in hotels.

“Oxford was always sort of that next destination that I wanted to open a facility,” Brown said. “I really just saw what I felt like was a niche that wasn’t being served. There was a lot of traditional kennel boarding and I just felt like a facility that has nicer accommodations and in a convenient location with a real focus the play and activity (was needed).

Delta Dog opened last Friday and came to be when Brown was talking to friend and veterinarian Dr. Ware Sullivan of Oxford’s Animal Care Center about the idea. Sullivan’s recommendation for Brown to buy some land and build from the ground up. That proved to be difficult and Ware connected Brown with the owner of the building Animal Care Center is located and in turn Brown bought the space where Vinson Boot & Shoe used to be after their lease was up.

From there it took about four months for construction to complete after Brown completely gutted out the space to turn it into a 5,000 square foot space for dogs to be pampered in style. There is also around 5,000 square feet of an outdoor play area that is divided into three sections for big and little dogs and a third play area.

Caring for owner’s dogs and giving them the best experience they can offer during their stay at Delta Dog is top priority there is also the idea of transparency. Webcams, which can be accessed on their website, are located in every suite and play area to allow customers to look in on their pet.

“We obviously want to provide excellent pet care but part of that is the customer feeling comfortable and confident in the people that are caring for their animal,” Brown said. “The only way to do that is to just be very transparent and show them there’s no back room we don’t allow you in or secret area. We’ll give you a tour of the facility anytime and we have windows everywhere so you can see into the play areas and everywhere else in addition to the webcams.”

Delta Dog offers everything but grooming, not wanting to intrude on the services Sullivan offers next door at Animal Care Center. They are open Monday-Friday from 7 a.m.-6 p.m., Saturday from 9 a.m.-4 p.m. and 4-6 p.m. on Sundays for pickup. Brown noted they will also offer pickup and delivery services.

For more information and prices of services visit deltadogoxford.com