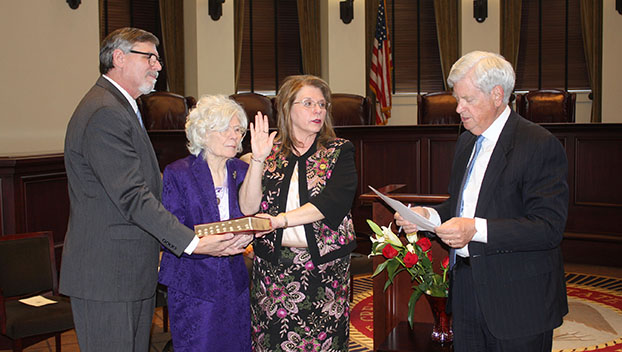 Chief Judge Donna Barnes was sworn in Friday as the first woman judge to lead the Mississippi Court of Appeals.

Barnes, who lives in Tupelo, grew up in Natchez.

Mississippi Supreme Court Chief Justice Michael K. Randolph signed the order appointing Judge Barnes as Court of Appeals Chief Judge before a large crowd in the En Banc courtroom in Jackson before he administered the oath of office.

“Clearly Lee County exported IQ points to the state capital that day, and we are all better off for it,” Wicker said. “Her admiring colleagues attest, calling her brilliant, a wonderful person, and stating that she exemplifies leadership and judicial temperament.”

Wicker noted that Barnes grew up in Natchez, was a Girl Scout, choir member and musician who played baritone in high school and in the Ole Miss marching band.

“This really is an historic occasion,” said Joy Lambert Phillips of Gulfport, who served as the first woman president of the Mississippi Bar in 2005. “She’s a trailblazer in her own right, but I think she will quickly tell you that she stood on the shoulders of all those women who came before her, women who blazed a trail when there was not even a narrow path to follow.”

Barnes recognized in the audience former Judge Mary Libby Payne, the first woman and one of the original judges of the Court of Appeals. Others who Barnes said inspired her included Supreme Court Chief Justice Lenore Prather, the first woman to serve on the state’s highest court and the only woman chief justice, and the late Lt. Gov. Evelyn Gandy.

“I owe each of these ladies a debt I can never repay, for doing what was not easy,” Chief Judge Barnes said. “My pledge to all the women in the profession who prepared my way, is that I will, in the way that I fulfill my duties as Chief Judge, try to make it easier for the women who come after.”