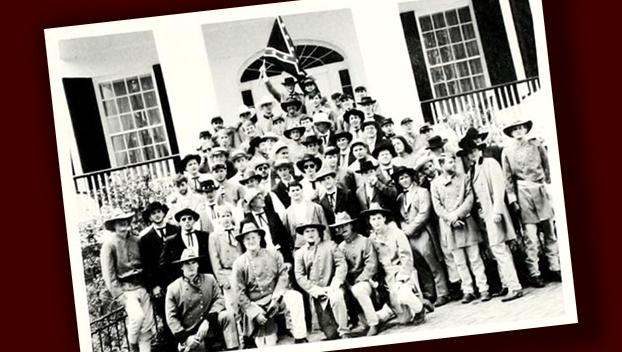 JACKSON, Miss. (AP) — While in college in the 1990s, Mississippi Lt. Gov. Tate Reeves took part in his fraternity’s Old South parties. And at such Kappa Alpha parties, members often wore Confederate costumes, a common practice among chapters in the South at the time.

A yearbook photo from Reeves’ time in the fraternity shows members dressed in Confederate outfits.

Republican Reeves, 44, is running for governor this year and has raised more money than any candidate in the race. He has been elected four times to statewide office — two terms as state treasurer and two as lieutenant governor.

While he was in Kappa Alpha at the private Millsaps College in Jackson, some in the fraternity were disciplined for wearing afro wigs and Confederate battle flags and shouting racial slurs at black students in October 1994.

Reeves presided over the state Senate on Friday in Jackson but did not stop afterward to speak to reporters who tried to ask him questions.

His spokeswoman, Laura Hipp, did not answer questions about whether Reeves had any connection to the 1994 events. As for whether Reeves wore Confederate costumes to Old South parties, Hipp said in a statement: “Like every other college student, he did attend costume formals and other parties, and across America, Kappa Alpha’s costume formal is traditionally called Old South in honor of the civil war veteran who founded the fraternity in the 1800s.”

Kiese Laymon, an author who was recently awarded the Andrew Carnegie Medal for Excellence, wrote opinion pieces for the Millsaps College student newspaper in the 1990s, including some that said the Confederate flag is racist. Laymon was among the African-American students who said they saw white pledges for Kappa Alpha and another fraternity, Kappa Sigma, wearing afro wigs and rebel flags. In “Heavy,” his memoir published in 2018, Laymon wrote that some of the fraternity members used racial epithets against him and one of his friends.

Millsaps put Kappa Alpha and Kappa Sigma on social probation from November 1994 to March 1995 and ordered members to take sensitivity classes because of the behavior.

Old South symbols and images are prevalent in Mississippi, with statues of Confederates soldiers standing outside many county courthouses.

Mississippi is the last state that still features the Confederate battle emblem on its flag, but all eight of the state’s public universities and several cities and counties have stopped flying the flag amid criticism that the battle emblem is a racist reminder of slavery and segregation. Supporters of the flag say it represents history.

Mississippi has used the same flag since 1894 and people who voted in a 2001 statewide election chose to keep the rebel emblem on it. The Republican speaker of the state House, Philip Gunn, said the emblem is “a point of offense that needs to be removed.” Reeves has not advocated change, saying voters chose to keep the flag.

Reeves spoke in 2013 at a Sons of Confederate Veterans meeting in Mississippi, and his Facebook account posted a photo of him behind a row of different designs of Confederate flags. A caption on the photo read: “Remembering our history and the lessons learned should be passed to future generations.”

During a special U.S. Senate race in 2018, photos surfaced of Republican Sen. Cindy Hyde-Smith holding a rifle and wearing a Confederate-style military hat. The photos were taken in 2014 when she was state agriculture commissioner and was on the Mississippi Gulf Coast visiting Beauvoir, the last home of Confederate president Jefferson Davis. In her Facebook post of the photos, Hyde-Smith remarked: “Mississippi history at its best.” Hyde-Smith defeated Democratic challenger Mike Espy in the November election.

Argument over 22 cents in self-checkout ends in shooting in Mississippi parking lot. One woman shot, two officers injured in incident.

If governor’s race about raising money, Reeves is killing…