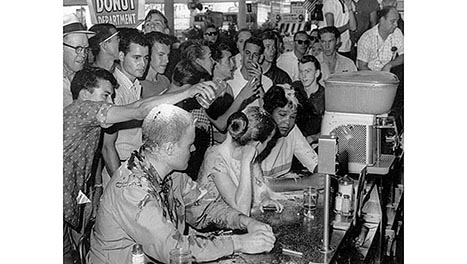 Anne Moody, seated at right, participated in a 1963 sit-in at a Jackson Woolworth's lunch counter. The image of their humiliation at the hands of others who protested the idea of a black person eating with white people was published around the world. Later this month, the Mississippi Department of Transportation will officially rename a portion of a state highway in honor of Moody. (AP file photo, used with permission).

A segment of highway is being named for a civil rights activist who wrote the memoir, “Coming of Age in Mississippi.”

Legislators voted in 2018 to name part of Mississippi 24 as the Anne Moody Memorial Highway.

The segment runs from Woodville to Centreville, in the southwestern part of the state.

A dedication ceremony is set for Feb. 20 in Centreville, where Moody grew up. One of the speakers will be her brother, the Rev. Fred Moody Jr.

Anne Moody was born in 1940. As a Tougaloo College student, she participated in a sit-in that challenged segregation at a Woolworth’s lunch counter in Jackson in 1963. The sit-in was captured by a news photographer and the image of the participants covered with food and condiments was published around the world.

Moody also participated in the 1963 March on Washington and the 1964 Voter Registration Project.