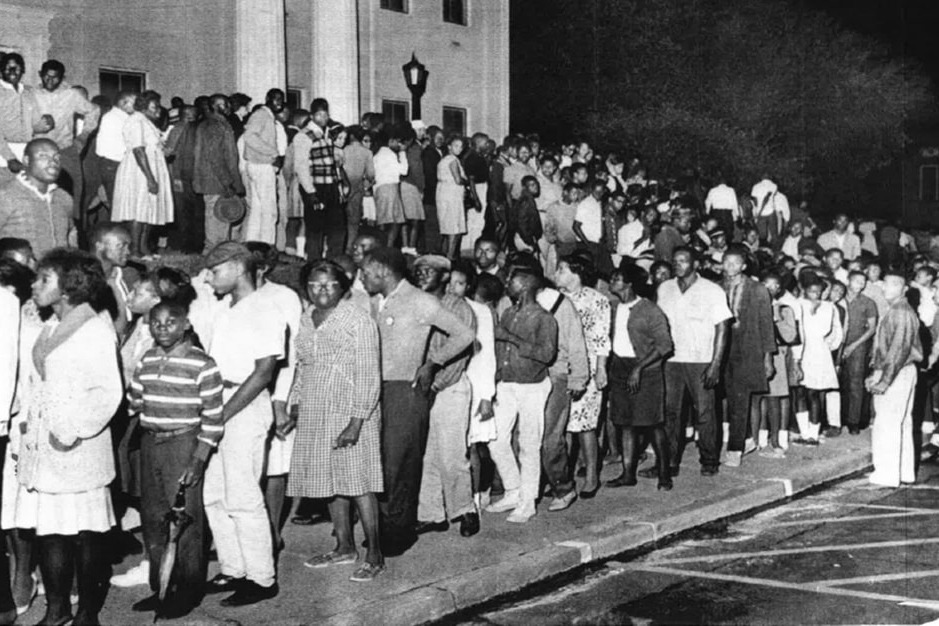 In October 1965, racial tensions were high in Natchez, Mississippi, which led to an injustice to approximately 150 of the city’s residents, dubbed the Parchman Ordeal, an atrocity the city is still coming to terms with more than 50 years later.

The city is hopeful funds can be located to pay for a monument to those affected.

President Lyndon B. Johnson in August 1965 had just passed the Voting Rights Act, outlawing discriminatory voting practices, and some black residents in Natchez were marching in support of civil rights on a regular basis, said Natchez filmmaker and historian, Mark LaFrancis.

“At the time, Natchez was a hotbed of marches for the Klan and the NAACP,” LaFrancis said. “There were almost daily marches by African-American marchers to affirm their desire to be treated equally with whites.”

In response, the city passed an ordinance banning parading without a permit, which was later ruled unconstitutional, LaFrancis said.

“So, the young people paraded without a permit,” LaFrancis said, adding they would not have been able to obtain one anyway.

Earlier that year, members of the Silver Dollar group of the Natchez area KKK were believed to have been responsible for planting a bomb in the ignition of Natchez Chapter NAACP President George Metcalfe’s car, but he survived the attempt, LaFrancis said.

Further stoking racial tensions at the time, the Natchez board of aldermen had rejected a petition submitted by local black leaders, seeking the board’s affirmation of basic civil rights for black people.

“Those three things occurred in a short period of time,” LaFrancis said, “within two months of each other.”

On Oct. 4, 1965, a group of approximately 700 to 800 young black people decided they were going to march in Natchez without a permit, despite the city’s threats to arrest them.

The group gathered at Beulah Baptist Church, which still exists on B Street, and the former China Grove Baptist Church that was located on St. Catherine Street.

Current Natchez Mayor Grennell said his father, Jonathan Grennell, was involved in the march that day with his friend and local civil rights leader, the Rev. Henry Russell.

“Those in attendances, according to my dad, said if they’re going to arrest us, we’re going to fill up their jails,” Grennell said. “So, they left Beulah and commenced their march; and about two blocks away, in front of Rose Hill Baptist, that’s where the local authorities confronted them and arrested them.”

LaFrancis said some of the older and younger marchers were released but the majority of the marchers were loaded on to buses and paddy wagons that had been stationed nearby and were transported to the city and county jails, which filled up quickly.

Then-Natchez Police Chief J.T. Robinson came up with an idea.

LaFrancis said Robinson made arrangements with then-Parchman State Penitentiary Superintendent C.E. Brazeale to house 150 of the detainees and some of the others were sent to other jails, denying all of them due process hearings in court.

In the darkness of night, the detainees were loaded on to buses outside of the City Auditorium at Canal and Jefferson streets to be transported to Parchman Penitentiary some 200 miles north of Natchez.

Henry Russell’s widow, Alma Russell, remembers the night, saying her husband had gone to the march, and she had stayed home that day.

“We owned a service station at the time, and the men who were running the service station for us that day called me and said, ‘Your husband has been trying to get to you.’ I said, ‘What happened?’ They said, ‘Come on. Come on down to the City Auditorium,’ and when I got here, the buses were loading, and he was on the bus.”

Alma Russell said she got on the bus and saw her husband and Jonathan Grennell sitting together.

“They asked me would I come and get them,” Alma Russell said. “I said, ‘Yes. I’ll come get you whenever they decide (we can) come and get you all, I will be there.’”

Darryl Grennell, who had been born earlier that year, said his father told him the story many times while he was growing up.

“My dad told my mom, ‘I will represent us,’” Darryl Grennell said. “‘You stay at home and take care of the baby.’ She wanted to be there.”

Darryl Grennell said his paternal grandparents owned a full-service Gulf gas station on the corner of Pine Street, and it was directly across the street from the Russell family’s gas station.

Darryl Grennell said his father told him Henry Russell got quiet as the buses arrived at Parchman.

“He was sitting right there next to him, and he looked over to the Rev. Russell, and he said he saw the biggest tears flowing down the Rev. Russell’s face, and he said, ‘Rev., What’s wrong?’ and Rev. Russell told my dad, he said, they refer to my dad as Baby Dump, that’s his nickname. He said, ‘Baby Dump, I don’t think we’re going to make it out of this alive.’”

Once inside Parchman Penitentiary, the detainees were abused, LaFrancis said.

“They endured abuse and punishment for four-to-seven days,” LaFrancis said. “They were forced to drink (laxatives). They removed their clothes and then put in cells like sardines, and opened windows. It was October so it was cold, and some men were hosed down. They were punished, abused and humiliated.”

LaFrancis said the detainees’ families had to post bond to get their loved ones out of prison.

“Dad was exiting his cell,” Darryl Grennell said. “Rev. Russell was in the cell next to him, and he said, ‘Baby Dump, tell my wife to come and get me because they’re going to kill me.’ They knew that he was a leader in the Civil Rights movement. He said, ‘They going to kill me.’ And my dad said, ‘Rev., I’m going to call her as soon as we get to a phone.’ … So my Dad said as they were exiting the gates of Parchman Penitentiary, there was Mrs. Russell. She had a driver to drive her up to Drew, Mississippi.”

After the detainees were released, they returned to Natchez and went back to work and no notice of the incident was recorded in local media, LaFrancis said.

Many of the detainees, Darryl Grennell said, suffered post-traumatic stress from the experience.

“When I was younger,” Darryl Grennell said, “I grew up with this. I knew the story. I knew that there were a lot of people in Natchez that did not know about it. In the white community, at the time, they didn’t talk about it. They didn’t tell their kids about it. They did not want to mention it. In the black community, yeah, the victims were affected, but the story wasn’t passed on to a lot of them like my parents told me the story growing up.”

The story got a broader audience in 2015 when filmmakers, LaFrancis, along with Robert Morgan and Darrell White, produced a documentary titled “The Parchman Ordeal: The Untold Story” chronicling the event. The film premiered in the City Auditorium on the 50th anniversary of the events in October 2015. The film was later aired on Mississippi Public Broadcast television last October. Also, the filmmakers are publishing a book through History Press titled “The Parchman Ordeal: 1965 Natchez Civil Rights Injustice” due out in November.

Also on the 50th anniversary in October 2015, the Natchez Mayor and Board of Aldermen adopted a formal apology resolution for the city’s part in the Parchman ordeal.

Darryl Grennell said that when he was elected mayor in 2016 the “Parchman Ordeal” documentary had recently been released.

“They interviewed some of the people who went to Parchman and so forth,” Darryl Grennell said, “but I knew that it had to be bigger than that. That we needed to erect some type of monument not only to honor, to memorialize, this event but also to tell the story so that people can know about it.”

So, Darryl Grennell said he appointed a diverse commission — blacks, whites, young and old comprising all socio-economic groups, native Natchezians, non-native Natchezians, people who participated in the ordeal and people who didn’t — to study erecting a monument and gave them three criteria: come up with a design, a location and to make sure everybody who was arrested was included on the monument, and: “No one would be omitted from being named on the monument that is engraved,” Darryl Grennell said, adding the commission was also tasked with making sure every name was spelled correctly before engraving.

Robert Pernell, who chaired the commission, said the commissioners took the task seriously, identifying some 439 names of people who were arrested. The names were available for public inspection in the library to verify spelling.

Now the final plans for the monument are in place. It will be titled “Proud to Take a Stand” and will be a black granite wall 6-feet tall and 12-feet long, bearing an engraved image taken from a historic photograph of people being arrested in the incident and all of the names of the 439 people arrested.

It will be placed on the grounds of the City Auditorium at the corner of Canal and Jefferson streets. It will have a plaza surrounding it and a sitting area.

Pernell said the committee chose the site after much consideration.

“One of the things was the site had to be significant to the event,” Pernell said, “and this site is, but there also were other sites like churches that were very significant. … we wanted people that visit Natchez to see this monument.”

Grennell said he believes the event is as significant to the nation’s civil rights movement as the Edmund Pettus Bridge events of 1965 in which hundreds of civil rights marchers were beaten with billy clubs and sprayed with tear gas, and he believes civil rights tourists would visit the area to see the monument.

“People want to travel,” Darryl Grennell said. “They want to know your history. They want to know all of it. The story needs to be told. History is very important, and it is important to know it so we don’t allow it to repeat itself, because it can, so the story needs to be told and it also is something that will bring people together. … There are people who travel all over the world to know about the Civil Rights movement.”

Pernell said the monument’s location on the corner of Canal and Jefferson streets would be visible from the street for tour buses and people driving by who might be tempted to stop for a visit. The design also is ADA compliant.

The project that began in 2016 has an estimated total cost of $130,000, said Robert Pernell, chairman of the Proud to Take a Stand Monument Commission.

Darryl Grennell said he not only has donated $1,000 of his personal money, but has also requested equal thirds from the City of Natchez, Adams County and the State of Mississippi.

To help garner the remaining funding, the Proud to Take a Stand Monument Commission has opened an internet-based, crowd-funding account to help raise the remaining $69,000, Pernell said.