NCCA be damned, Ole Miss won all those games and that truth cannot be denied 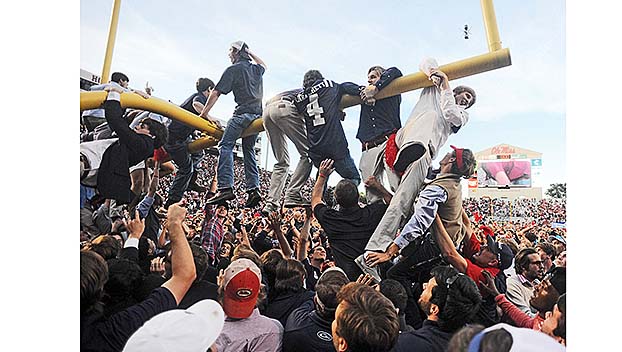 For Ole Miss fans, this week’s NCAA punishment in which 33 wins were taken away from the Rebels for rules infractions may erase the official records, but nothing can erase the tremendous memories and joys of the wins that the NCAA now says didn’t happen.

The NCAA would like the world to simply forget those wins, but that’s impossible. Despite the rules violations, Ole Miss won these games, regardless of what the NCAA says:

Who can forget the amazing Oct. 4, 2014, come-from-behind win against No. 3 Alabama? Certainly none of the fans who enthusiastically climbed the goalposts and road it valiantly to the ground.

And the images of a piece of the goalpost being proudly paraded from the stadium to the Square for a celebratory jaunt? Priceless and unforgettable.

Ole Miss fans will also continue to claim real victory in the 2012 and 2014 Egg Bowls. Mississippi State may get the win on paper, but Ole Miss fans know who won the games.

The NCCA can officially take what they want from the record books, but the Ole Miss fans know their team won that day, fair and square, defeating Alabama outright.

To suggest anything less is just ridiculous.

For a quick trip down memory lane, re-read the game coverage of that beautiful Saturday win here:
https://www.oxfordeagle.com/2014/10/05/ole-miss-rallies-to-down-no-3-alabama/