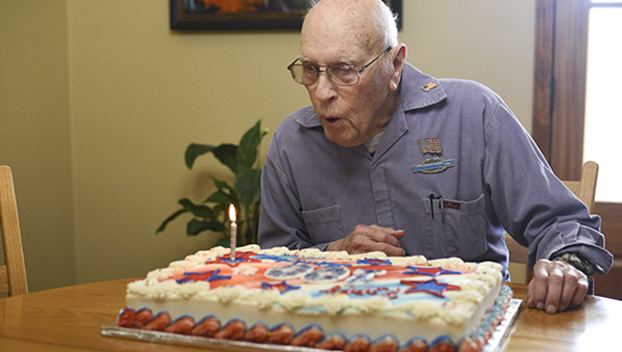 VICKSBURG — Heiman Cohn is a World War II veteran who served under generals Patton, Collins and Eisenhower. He was involved in battles at Kasserine Pass and El Guettar in North Africa and survived German firepower from “Big Bertha” in St. Lo France. Cohn married the love of his life, Jane Hill, on Oct. 14, 1945, and on Feb. 13, 2019, a surprise birthday party was held to celebrate his 100th birthday.

“This is something I never expected. It is really a great feeling to have people love you like this,” Cohn said.

Surrounded by family and friends, Cohn’s birthday celebration was held at the home of Bill Libbey, who is the owner of the Carriage House Apartments, where Cohn has lived since 1968.

“I’ve known him (Cohn) for the last probably 20 to 25 years as the owner of the apartments,” Libbey said, “and he and his wife were just a lovely couple.”

And to honor him, Libbey said, he wanted to throw him a surprise birthday party.

“When somebody makes it to be a 100, somebody needs to stand up and take notice,” he said, “especially someone who has done so much for the country.”

Several years ago, Libbey said, Cohn began putting a little flag out in front of the apartments.

“He would put it out every morning, so my son and I decided to build a flag pole,” Libbey said, adding, a plaque was also installed with a dedication marker that reads “This flagpole is dedicated to WWII veteran Maj. Heiman Cohn,” Libbey said, “And underneath I put ‘a true American’ and when he saw it, he bowed up and said, ‘this makes me so proud.’”

Nephew Danny Cohn said the highlights of his uncle’s life were serving in the military and being married to his wife for 70 years.

He also said his uncle has a wonderful spirit.

“He was a talented craftsman. He made beautiful furniture, and he would make cradles and give them to people when they were going to have a child,” Danny Cohn said.

Cohn wrote an autobiographical account of his life entitled, “Our Wonder Life.”

The book includes a family history, as well as memories of his military career. It also serves as a tribute to his wife, who died in 2015.

And as a centenarian, Varner said, Cohn’s memory is still “very intact.”

“He always has a great attitude,” Varner said.