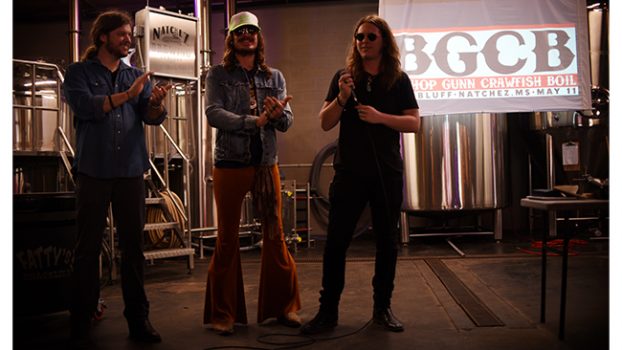 NATCHEZ — More than 100 people kicked off the music lineup for the second annual Bishop Gunn Crawfish Boil with an announcement party in Natchez Friday afternoon.

“This city’s greatest asset is its people, and there is a great group of guys who love this town — Bishop Gunn,” Natchez Mayor Darryl Grennell said as he was drowned out by the crowd clapping and  hollering in agreement.

Bands that will be playing on May 11 on the Natchez bluff include the following:

Bishop Gunn will also be playing during the event.

“We have some kick-a** music on this year’s lineup,” music promoter Arden Barnett told the crowd before the announcement of the lineup.

Barnett thanked the crowd and sponsors for the support, including the City of Natchez which Barnett said was instrumental in the success of last year’s inaugural event.

“The city really stepped up to the plate and came through for us,” Barnett said. “(Last year’s event) wouldn’t have happened without their support.”

Natchez native and actor Ritchie Montgomery praised the lineup and Bishop Gunn for their support of Natchez.

“With these guys in Natchez, Rock and Roll is in good hands right now,” Montgomery said.

Tickets are $30 for general admission and $250 for VIP access, which includes full access to the VIP tent, food and drink, air-conditioned restrooms, access to VIP viewing area.