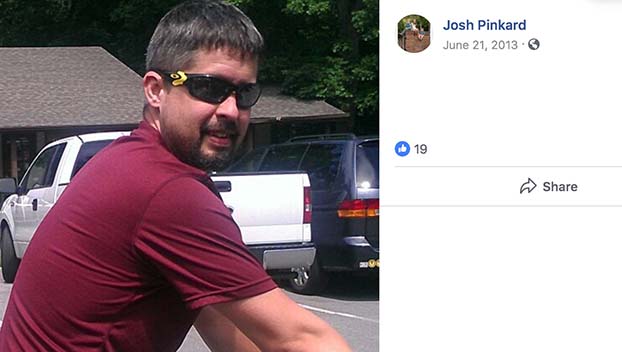 A Mississippi native asked for prayers for her family, particularly her children, just days after her husband and the father of their children was murdered by an employee who was being fired.

In a social media post Terra Pinkard described the details of how she learned about her husband Josh Pinkard’s death.

“Friday afternoon, the day after Valentine’s Day, was a literal nightmare,” she wrote. “I received a text at 1:24 from my precious husband that said I love you, I’ve been shot at work.”

Josh had been shot, along with five work colleagues at a Henry Pratt Co. warehouse outside Chicago by a man police say became violent after learning he was being fired from the plan. Police shot the gunman who later died of his wounds.

“It took me several times reading it for it to hit me that it was for real,” Terra Pinkard wrote. “I called his phone several times, text, FaceTime, nothing.

“I called his plant and a lady answered and said she was barricaded in her room and police were everywhere.”

“Of course my heart dropped,” she wrote.

Eventually she was told to go to a staging area for victims’ families.

“The police told us there were fatalities,” she wrote. “He read my husband’s name. I immediately left and went to get my kids. With my pastors help, since family was still on planes to get to us, I told my children their dad did not make it and is in heaven with Jesus. I’ve never had to do something that hard.”

Throughout Pinkard’s social media posts made public since her husband’s murder, one thing has remained true – her faith in God.

“I lost the love of my life yesterday in a tragic workplace shooting,” she wrote on Saturday. “The world is darker and more sad now. A huge bright light has left this world.

“But God. The Lord giveth and the Lord taketh away. Blessed be the name of the Lord. I am lost and devastated beyond words. Things that mattered yesterday do not matter today.”

“And I will cry out to God during this immense time of sadness and need,” she wrote.

Terra Pinkard said her grief prevented her from speaking publicly about the man she loved and with whom she has three children.

“I literally can’t talk out loud about this lovely man without breaking down in sobs. I’m crying now as I write this,” she wrote. “I want to shout from the rooftops about how amazing Josh was! He was brilliant! The smartest person I’ve ever met! My best friend! The man I would have leaned on during devastation like this who would tell me it’s ok Terra, it is all going to be fine.”

“The man who was dying and found the clarity of mind for just a second to send me one last text to let me know he would always love me,” she wrote. “This unbelievable person was robbed from us.”

Terra Pinkard also sought the public’s prayer for she and her family.

“Please continue to pray for my mother in law. This is her second child she will bury,” she wrote. “Please pray for my sister in law. Josh was her twin brother.

“Please pray for my children,” she wrote.

“They are struggling because they miss a daddy who loved them so much. Please pray that somehow I can put that one foot in front of the other.”