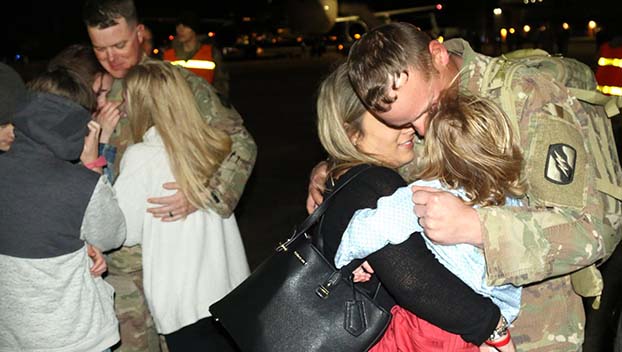 The families of Sgt. Baron Carwyle, of Pontotoc, and Staff Sgt. Mike Chism, of Corinth, welcome the soldiers home Monday night at Thompson Field in Flowood. The pair were among approximately 300 soldiers of the Mississippi Army National Guard’s 155th Armored Brigade Combat Team serving in Kuwait in support of Operation Spartan Shield since their mobilization in April 2018. (U.S. National Guard photo by Staff Sgt. Scott Tynes)

A Mississippi National Guard unit is coming home from a deployment to the Middle East, with the first 300 members of the 155th Armored Brigade Combat Team returning to Mississippi on Monday after leaving last April.

More than 4,000 guard members deployed to Kuwait to deter and react to threats as part of Operation Spartan Shield, the unit’s third deployment to the Middle East since 2001.

Hundreds of family members and friends came out Monday night to the guard’s air base at the Jackson airport to meet the first two flights home, carrying gifts, balloons and signs.

It takes about 14 days for soldiers to go through demobilization, and all the unit’s soldiers are expected to be home by late March. The Tupelo-based brigade has units in McComb, Senatobia, Starkville, Amory, Monticello and Meridian, as well as Kansas City, Kansas.

One returning citizen soldier, Sgt. Pamela Stevens staged a surprise reunion with her two sons and other relatives Tuesday at Booneville High School.

The Northeast Mississippi Daily Journal reports her sons, 14-year-old Waylon Miller and 13-year-old Mackenzie Stevens, were called down to the basketball court during a pep rally.

Teacher Sherry Ferrell announced the names of local students and staff with family members in service to honor them, and Stevens’ two sons were asked to walk down to the court to watch a video message from their mother that said she would be returning home soon.

The boys were given gifts donated by local businesses to give to their mother, who ordered parts for military vehicles as part of the maintenance section.

“I thought we were going to give her the presents when she got home and I thought she was getting home in less than a month, but then when Ms. Ferrell gave us the gifts, I didn’t think I was going to be able to cope with it,” Mackenzie Stevens said.

Then Pamela Stevens walked in through a side door with a sign and a big smile on her face. She hugged her sons and the teens teared up while classmates cheered from the stands.

“I kind of thought it was going to be her, but I didn’t know,” Mackenzie Stevens said. “It was surprising and I was really happy she was home.”

Pamela Stevens last deployed to Iraq when her sons were 4 and 5 years old. She doesn’t expect to deploy for at least another few years.