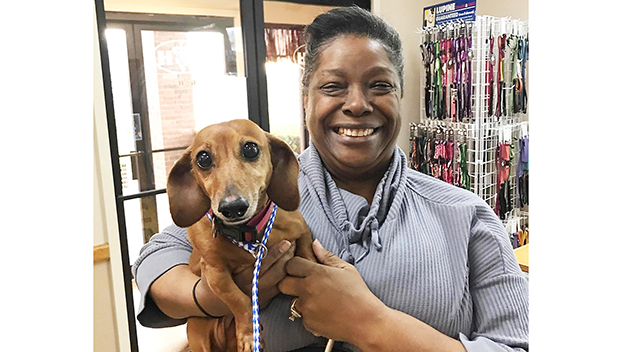 Norrette Ford is reunited with her dachshund, Cheerio, Monday in Vidalia after the dog had been missing for four years. (submitted)

A Texas woman who had lost her dog Cheerio on a trip to Mississippi had just about given up hope of ever seeing the pooch again. It had been four years since she last saw the female dachshund. Then her phone rang.

Norrette Ford said she is a member of a dachshund rescue group based in Dallas and adopted the miniature dachshund, Cheerio, from the Dallas Animal Shelter to save her from being put down four years ago.

Soon after, Ford said she was visiting her aunt and mother in Natchez, Mississippi, for two weeks and took her new puppy with her. At the time, she was considering gifting Cheerio to her aunt, since she already had two dachshund and Chihuahua mix pups at home in Wilmer Texas; However, before Ford’s visit was over, Cheerio vanished from her aunt’s front yard, she said.

“When we got her, she was only three or four months old,” Ford said. “Because she was so small, we ran up and down the road looking for her, but couldn’t find her.”

Earlier this week, Ford said she received a strange call from Gregg Veterinary Hospital in Vidalia, Louisiana, across the river from Natchez, Mississippi.

The vet clinic is located across Carter Street from the Vidalia Walmart.

“At first, I couldn’t figure out what was going on,” Ford said. “I thought they were going to say they found her body, but then they said, ‘She is here.’”

A woman was loading groceries into her car with her door open in the Walmart parking lot, turned around and found Cheerio — in good health — sitting in the back seat, said Dr. Jennifer Curran, a veterinarian at Gregg Veterinary Hospital.

The woman drove Cheerio to the clinic, where Curran scanned her to see if she had an identifying microchip implanted in her neck, found one and called Ford, the registered owner.Ford made the trip from Wilmer, Texas to be reunited with Cheerio, feeling nervous that her long lost pup would not recognize her, Ford said.

However, as soon as Cheerio saw Ford again, she immediately ran right past other people sitting in the lobby and straight to her, whimpering to be held and licking her when she was in her arms again, Ford said.

“I was happy to get a second chance,” Ford said. “When we lost her, I was really regretting even thinking that I would give her up. … She is now safely indoors at my home in Texas and has the run of everything. … It’s pretty amazing, almost like a fairy tale. … I want to thank Jennifer. She was really sweet and took good care of her for me.”