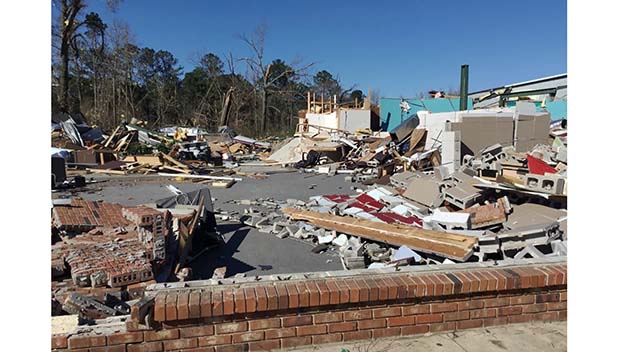 The deadly tornado that ripped through the city of Columbus Saturday cut a 9.6-mile long swath as wide as four football fields in places, weather experts said Sunday.

The Jackson office of the National Weather Service conducted a survey of damage Sunday around Columbus, Mississippi, Sunday and released their results Sunday night.

Damage assessments indicated the EF-3 twister was on the ground for approximately 18 minutes. In that time, the tornado traveled approximately 9.6 miles, cutting a path across sections of Columbus.

Columbus Mayor Robert Smith Sr. said 41-year-old Ashley Glynell Pounds of Tupelo and her husband were renovating a house Saturday evening, and when the husband went to get them something to eat, the building collapsed in the storm and killed her.

Smith said 12 other people were injured, but the injuries did not appear to be major.

“There was pretty extensive damage,” Dillon said Sunday, a day after the Columbus twister struck. “But the streets today have been filled with workers and volunteers, all working hard to clean up the mess.”

Officials said a second, smaller twister damaged a mobile home and a shed and snapped trees in a small community in the region that same afternoon as severe storms rolled through.

At First Pentecostal Church in Columbus, the Rev. Steve Blaylock said the building was “a total loss,” with a wall pushed in, holes in the roof and substantial water damage. He and his congregants tried to salvage what they could on the morning after the storm. But he said they still held a Sunday prayer service and even went ahead with a scheduled baptism, using a borrowed portable baptismal pool.

“We will rebuild. We’ve got a good church here,” Blaylock said. “It’ll be a testimony of God.”

Residents of one street on the east side of Columbus were out early Sunday morning with chain saws, clearing away branches of the many trees that had snapped or were uprooted in the storm. Metal siding and roofing materials were scattered throughout the neighborhood of older homes. While the houses generally remained standing, sheds and outbuildings were mostly demolished.

The article contains reporting from The Associated Press.